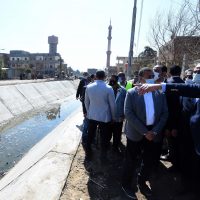 The Minister of Irrigation: Executing 16 projects, with a total cost of 280 million pounds, within the governorate … 300 km of canals in Ashmoun and Al-Shuhada will be lined as part of the Decent Life initiative

Dr. Mustafa Madbouly, Prime Minister, today, in the governorate of Menoufia, inspected the works of the canal-lining project in the village of Sibak Al-Dahhak, affiliated to Al-Bagour Center, as well as the executive position of the project at the governorate level.

During his and his companions inspecting the canal-lining works in the Al-Bajour Center, the Prime Minister stressed the importance of the work that is being carried out in the national project for lining and rehabilitation of canals at the level of the Republic, especially in working to improve water management and use, increase productivity, in addition to adding other areas of agricultural land, as well as reducing Water is wasted.

The Prime Minister and his companions were received by the Mayor of “Sobak Al Dahak” village and the Prime Time Zone who expressed their welcome with a standing ovation, and carried Dr. Mustafa Madbouly a message of thanks and appreciation to President Abdel Fattah El-Sisi, President of the Republic, for all the efforts made in the various sectors, and the endeavors made to improve the level of services provided. For them, as well as supporting them in the optimal use of modern irrigation methods by drip system instead of flood irrigation, stressing that this helped them to achieve labor savings, reduce water waste rates from 40 to 50%, as well as save fertilizers by 40%, increase production and lower prices. Crops, in addition to early harvest and improving production specifications, which contributes to increasing crop production, contributing to self-sufficiency, and exporting it abroad, in addition to starting new crops.

During the gathering of the Prime Time Zone of the village around the prime minister and his companions to listen to their demands, the prime minister responded to the residents’ request for the necessity of constructing a wire fence on the edges of canals that pass through the area of ​​population blocks This is in an effort to protect parents and their children, and to prevent waste from being dumped in them, stressing the need to preserve what has been achieved in this project from the parents themselves.

During his inspection of the project of lining and rehabilitating the “Sobak Al-Dahak” canal, the Prime Minister listened to an explanation about the projects being implemented within the project’s work in the governorate, urging Dr. Mohamed Abdel-Ati, Minister of Water Resources and Irrigation, to continue work on implementing 16 projects with a total cost of 281 million pounds. In the governorate’s range, with lengths of 86,700 km, and the completion of the lining works, with a total of more than 16 km, has been completed.

At the same time, the “Shuhada” and “Eshmoun” centers have been included in the “A Decent Life” initiative, and the canals of the two centers are being fully rolled out to rehabilitate approximately 300 km of canals.

With regard to the project of rehabilitating the “Sobak Al-Dahhak” canal, which is one of the canals of the General Administration of Irrigation in Menoufia with Al-Bagour Irrigation Engineering, with a length of 3,600 km, the actual implementation of the project began last January, and work is underway to complete its phases.

The article The Prime Minister inspects the project of lining canals in the village of “Sobak Al-Dahhak” in Al-Bajur. It was written in Al-Borsa newspaper.