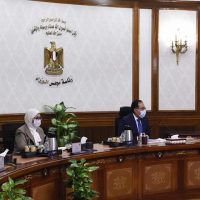 At the beginning of the meeting, the Prime Minister stressed the importance of this component of the projects, within the presidential initiative “A Dignified Life”, stressing that in addition to the field follow-up of the projects, periodic meetings are held with the ministries and concerned authorities to discuss and overcome any challenges that may face the implementation process.

Dr. Hala Zayed said that the Ministry of Health has taken serious steps with regard to the interventions related to it with the “Decent Life” initiative, noting her recent visit to Germany; In order to import 2510 ambulances and mobile clinics to serve the villages of “a decent life”.

And the minister continued: We requested 62 plots of land from the governors to establish new health units, 55 plots of land were provided, and the remaining seven plots are being managed, and we also have 244 hospitals, including 8 newly established hospitals, and most of the sites have been received from the implementing agencies, and coordination is underway regarding The rest of the hospitals, respectively.
During the meeting, Major General Ihab Al-Far, head of the Engineering Authority of the Armed Forces, indicated that the total projects planned to be implemented by the authority in the health sector amount to 763 projects.

Major General Ihab El-Far reviewed the executive position of the projects being implemented in the field of health in the first phase of the presidential initiative, a decent life. He also presented construction models for family medicine centers and health units, as well as the time plan for completing hospitals, health units, family medicine centers, and emergency points.

Major General Mahmoud Nassar indicated that the Central Agency for Reconstruction is implementing health and ambulance sector projects, as well as projects in the sectors of: service complexes, youth and sports, bridges and irrigation, roads, agricultural and veterinary services, social solidarity, electricity, decent housing, and industrial complexes and workshops.

The article the Prime Minister follows up on the position of hospitals and health centers within the “Decent Life” initiative was written in Al Borsa newspaper.