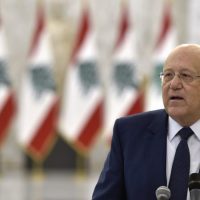 Lebanon’s Prime Minister Najib Mikati confirmed that the government is currently working to address the emergency situations the Lebanese are experiencing and to start the internal reforms required to stop the financial bleeding and improve the administration and institutions, in parallel with the start of negotiations with the International Monetary Fund to set a long-term reform program, based on the Lebanese needs and the importance of supporting countries and its donor agencies.

This came during his meeting with German Minister of State for Foreign Affairs Nils Annan and his accompanying delegation today at the Grand Serail (the seat of the Lebanese government), which witnessed a review of the general situation in Lebanon and the region and ways to strengthen bilateral relations between the two countries.

Mikati added that Lebanon appreciates the effort and attention shown by Germany to support it in the current crisis it is going through, stressing that Lebanon is able, despite the difficulties, to rise again.

The Prime Minister of Lebanon explained that one of the government’s priorities in the current situation is to achieve financial reform and increase the hours of electricity supply, in addition to supporting the poorest families and securing their life necessities, stressing the government’s commitment to adopting absolute transparency in all development projects, especially the reconstruction of Beirut Port.

Mikati reiterated his commitment to holding the parliamentary elections on time, given that this entitlement constitutes a priority in determining the choices of the Lebanese and adhering to the provisions of the constitution.

The article, the Prime Minister of Lebanon: We are working to address the emergency situation and stop the financial bleeding, was written in Al Borsa newspaper.