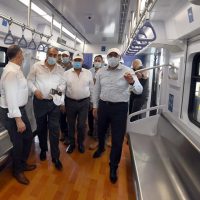 Madbouly: The state is implementing an integrated system that will represent a real revolution in mass transportation

Prime Minister Mostafa Madbouly said that the LRT project will be operated in conjunction with the opening of the new administrative capital to be able to transport a large number of citizens.

He added that the first phase of the train transports about 1,800 passengers, as the train consists of 6 cars, each car carrying 300 passengers on the journey, and with the movement of trains, it will be able to transport tens of thousands of passengers throughout the day.

Madbouly explained, in press statements after inspecting the implementation of the electric train project “Al-Salam – Administrative Capital – Tenth of Ramadan,” that this project is giant by all standards, as it makes a qualitative leap in the mass transportation system in Greater Cairo.

He pointed out that the project, in its various stages, will extend to about 100 km, and there is a stage that is currently being worked on. The capital is by mass transportation, starting from Adly Mansour station, at which the third line of the subway ends, so that it is an important and easy option that can be relied upon for those who want to move to reach the communities located in east Cairo, all the way to the administrative capital.

The Prime Minister continued: “This project, during the planning, design, and agreement with the Chinese company that is implementing it with an alliance of Egyptian companies, was supposed to take 4 years, but today we aim to complete the first phase by the end of October to start its trial operation stages, which lasted only two years.” “.

Madbouly added that it was designed to have a large parking area in front of each station of up to 2,000 cars, to encourage citizens to stop relying on private cars, so that the citizen would then be able to leave his car and move in this way freely and quickly.

The Prime Minister stressed that the project is part of an integrated transportation system implemented by the Egyptian state at the level of the whole country, which will represent a real revolution in the mass transportation system, and includes the implementation of the monorail project in which we also struggle with time, both the line that transports to the capital, and the other line that reaches the city 6th of October, as well as the subway lines that are underway, and two major projects in Alexandria, namely the Abu Qir metro and the Raml tram, and we are expanding as a country within major cities in this type of mass transportation, electric and environmentally friendly, in addition to the high-speed train network that will connect Between the east and west of the republic, as well as between its north and south.

The article, The Prime Minister: Operating the electric train in conjunction with the opening of the Administrative Capital was written in Al Borsa newspaper.