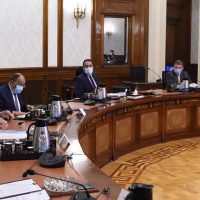 Dr. Mustafa Madbouly, Prime Minister, held a meeting today; To follow up the executive procedures of the project to develop the capitals of the governorates and major cities, in implementation of the mandates of President Abdel Fattah El-Sisi, the President of the Republic, in the presence of Major General Mahmoud Shaarawy, Minister of Local Development, Hisham Tawfiq, Minister of the Public Business Sector, Dr. Asim Al-Jazzar, Minister of Housing, Utilities and Urban Communities, and officials of a number From the concerned authorities.

At the outset of the meeting, the Prime Minister reiterated that the project to develop provincial capitals, which President Abdel Fattah El-Sisi, the President of the Republic attaches great attention to, which will have a positive impact on the quality of life for residents of those capitals and major cities, and their appearance in a decent manner.

Dr. Mostafa Madbouly said: The project to develop governorate capitals and major cities includes the construction of about 500 thousand new housing units at the governorate level, within the initiative of the President of the Republic “housing all Egyptians”, as part of the work to stop the random growth of buildings within those cities, where the lands were counted Available space, in coordination with the concerned authorities and the governorates, indicating at the same time that it was agreed to start implementing the method of partnership with some of the authorities with jurisdiction over the lands within these cities, including the ministries of the business sector and endowments.

Counselor Nader Saad, the official spokesman for the Presidency of the Council of Ministers, indicated that, during the meeting, the position of the lands in the jurisdiction of the Ministry of Public Business Sector was determined, in terms of the possibility of entering the urban development project for the capitals of the governorates and major cities, explaining that it was noted in light of the availability of a number Of the plots of lands received from the inventory that was conducted, including lands in a number of governorates, it was agreed that they would be included in the project in its various stages, and other plots for which a partnership protocol was signed with the New Urban Communities Authority, with the aim of developing it.

The official spokesman of the Council of Ministers said: The meeting witnessed a review of a detailed statement of all the plots of lands that were counted, their location, and the position of their entry within the urgent phase, or the first or second phase of the project to develop provincial capitals and major cities. Investment and social housing and alternative to slums in a number of governorates, within the initiative of the President of the Republic “housing all Egyptians”, in terms of uses and housing levels surrounding the area, determining the extent of the presence of unplanned areas in the city, and the extent of the need to provide housing stock in them, then a final evaluation of each plot Of which.

The article The Prime Minister: Creating 500 thousand housing units to stop the random growth in provincial capitals was written in Al-Borsa newspaper.