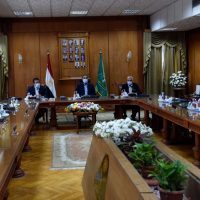 Madbouly: The projects implemented by the state in the governorates require the benefit of academic experiences in universities

Dr. Mustafa Madbouly, Prime Minister, met today with the Council of Menoufia University, in the presence of Dr. Khaled Abdel Ghaffar, Minister of Higher Education and Scientific Research, Major General Ibrahim Abu Limon, Governor of Menoufia, and Dr. Adel Mubarak, President of the University and members of the University Council.

The Prime Minister expressed his happiness at his presence in this great educational edifice, saying: “I have full respect and appreciation for all academic and scientific institutions at the level of the Republic,” and the Prime Minister affirmed that all state institutions work side by side. This is in order to achieve the general good of the state and citizens.

He added that this stage is witnessing an unprecedented interest in higher education from President Abdel Fattah El-Sisi, President of the Republic. Either in terms of concern for the necessity of establishing a university in every governorate, or through the establishment of private universities, which will have a major role in providing excellent services to a large segment of students.

The Prime Minister announced his approval of two demands of Menoufia University, with regard to the emergency hospital and the Liver Institute, stressing the continuation of full support for the university, and praising all the efforts made by the university to serve the citizens, and Dr. Madbouly declared that there is nothing to prevent coordination regarding the provision of land for the university. In Sadat City, directing in this regard to submit the study on this proposal, provided that coordination is done on it.

The Minister of Higher Education and Scientific Research indicated that Menoufia University, one of the institutions affiliated with the ministry, was established in 1976 of the last century, and its colleges are distributed among the centers of Shebin al-Kom, Menouf, and Ashmoun, and currently the university includes 23 colleges and institutes.

The Minister also noted that Menoufia University provides advanced and diversified services of an educational, cultural, research and community nature, and has effectively contributed to preparing, qualifying and building human cadres scientifically and culturally, in addition to its contributions to community development and environmental protection, as part of an integrated national system for economic, social and cultural development.

During the past year, many distinguished educational programs and new scientific departments were opened in the various faculties of the university, and the second university youth week for the Disability Challenge was organized during the period from 1 to 6 September 2019 with the participation of 15 thousand students of determination.

Dr. Khaled Abdel Ghaffar noted that the university progressed annually in many fields, as it had a role in facing the Corona pandemic, especially as it has hospitals that provide excellent services to citizens.

The President of Menoufia University expressed the university’s willingness, officials and students to participate in all initiatives launched by President Abdel Fattah El-Sisi, President of the Republic. He said: We are soldiers who put ourselves on standby to implement all the service, production and development projects that serve the country, within the framework of the university’s mission that aims to develop society.

The article The Prime Minister: The state plans to establish a university in each governorate. It was written in the Al-Borsa newspaper.

“Everyone has limits except the king.” New statements by Jordan’s King Abdullah II on the crisis of his brother Prince Hamzah A homeland...