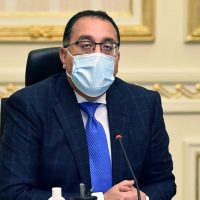 Madbouly: We seek to prevent unplanned random construction or encroachment on agricultural lands

We have been warned of the consequences of the illegal construction … and the first to be affected are the residents. The “Ring” and “Alexandria” buildings are a clear example

We will not remove unplanned buildings, but we will intervene to improve the Prime Time Zone’s livelihood

Dr. Mustafa Madbouly, Prime Minister, said that the state is currently completing the development of unsafe areas and housing its Prime Time Zone, at a time when the area of ​​unplanned construction is about 45% or 50% of the world, such as Izbat Al-Haggāna, which is the accumulation of decades past.

Madbouly referred, during today’s cabinet meeting, to the visit of President Abdel Fattah El-Sisi, President of the Republic, to the “Ezbet Al-Haggāna” area, during which he was accompanied by the Prime Minister and a large number of government members.

Madbouly added that the required interventions to serve these areas are to open hubs and streets, and to provide various services to their residents, so removing all these areas that are overcrowded with millions of residents is a very difficult and expensive issue, and the cost of intervention in these areas is higher than the cost of building new areas.

He continued: “This explains the state’s interest in expanding currently, with mandates from President El-Sisi in building new cities, to provide safe and planned housing in fully-serviced civilized societies, and to prevent illegal construction in violation, or encroachment on agricultural lands in villages.”

The Prime Minister drew attention to what happened in the building of the ring road in violation of the fire, as well as the Alexandria building in which a dangerous tendency occurred, explaining that this comes within the framework of what has already been confirmed and warned the state of the consequences of the violating building on everyone, and that the first victims are Residents themselves, which actually happened.

He said that the state will intervene in unplanned construction to improve the lives of citizens, and that the buildings will not be removed as long as they are habitable, but surgeries will take place, which will contribute to improving the lives of those living in these areas, by opening streets to facilitate the entry and exit of residents, as well as providing a suitable environment for housing.

The Prime Minister stressed the importance of the great project that the government has started now, commissioned by President Abdel Fattah Al-Sisi, President of the Republic, to develop provincial capitals and major cities, noting that through it 500 thousand housing units will be constructed to provide civilized housing for residents of slum areas in these cities, pointing to The state is currently confining the lands suitable for this project, whether it belongs to government agencies, business sector companies, etc.

Madbouly touched on the visit of President Abdel Fattah El-Sisi to the Administrative Capital, to follow up the executive position of the various projects that are being established inside the capital, indicating that there is periodic follow-up by the ministries and relevant authorities of the various works that are being implemented, in an effort to complete the various work, Especially the government sector and fully furnishing it, in preparation for the start of the transfer of employees in an experimental and gradual manner in the second half of this year, provided that some elements of the employees will run the participatory electronic programs in each ministry, as well as check on the daily work cycle; In preparation for the transfer of employees, respectively.

The article The Prime Minister: We are expanding in building new cities to provide safe and planned housing that was written in Al-Borsa newspaper.