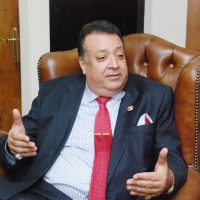 Saad El-Din: Egypt has achieved self-sufficiency in gas and expectations will not increase the price locally

A number of manufacturers and energy experts said that the significant increase in gas prices globally will open a new door to the development of the industrial sector in Egypt, provided that supply prices remain fixed for companies at $4.5 per million thermal units.

Engineer Mohamed Saad El-Din, Chairman of the Energy Committee of the Federation of Egyptian Industries and President of the Gas Investors Association, said that Egypt’s natural gas discoveries in recent years enabled it to enter gas export markets, and the exported quantities amounted to about 1.4 million tons during the second quarter of this year 2021.

He stated that the continuation of the rise in international gas prices will have a positive impact on Egypt in terms of the increase in the export revenue compared to the period when the price fell below $5 per million British units at the beginning of the year.

He explained that Egypt was able to operate the two liquefaction plants in Damietta and the Idku complex, with a production capacity of more than 12.2 million tons annually, after a hiatus that lasted about 8 years, which contributed to achieving self-sufficiency in gas and exporting the surplus.

He added that Egypt is likely to attract large investments to the energy, petroleum and industrial sectors in the coming period, given the successes and strong indicators of achieving significant growth in these sectors, and the stability of the gas price locally.

The price of natural gas contracts for October delivery in global markets rose to the level of $5.23 per million British units, compared to $2.54 per British unit at the beginning of 2021, achieving a gain of 103%.

Analysts at Bloomberg News attributed the significant increase in gas prices to a lack of supplies and stocks in the United States and Europe, amid Tropical Storm Nicholas and the closures that resulted from Hurricane Ida and the effects of the Corona pandemic.

Engineer Samir Aref, head of the Tenth of Ramadan Investors Association, said that some industrial sectors, including chemical and fertilizers, depend on natural gas as a main input in the manufacturing process, and the increase in the local price will weaken their competitiveness.

Aref added that the association will ask the Ministries of Trade, Industry and Petroleum to keep gas prices fixed at this rate and not to link them to international prices so that factories can return to work at their full production capacity and fill the void in some markets as a result of the exit of European companies from them.

He expected gas prices to remain stable due to the government’s desire to support the industrial sector and double exports.

Eng. Sobhi Nasr, member of the Ceramic Industry Division, Vice-Chairman of the Egyptian Federation of Investors Associations, said that the ceramic industry is one of the industries consuming natural gas, and therefore it is a strong candidate for penetrating foreign markets by ensuring that gas prices are not raised in Egypt.

He pointed out that this gap between the local and global price will lead a large number of companies operating in the building materials sector to recover and be able to compete in the nearby export markets, which are currently undergoing reconstruction, including Libya and Iraq.

He mentioned that the globally importing companies are looking for a cent in price differences, and thus rehabilitating the factories to benefit from the high global price of gas and to seize more export contracts in African and European countries.

Oil stocks in Europe were affected by the decline in natural gas exports from Russia during the last period.

Natural gas is one of the preferred sources of energy in the United States for electricity and factories, and a primary source of heating for about 50 percent of homes.

Hilal: The rise in the global price is temporary until there are alternative sources of energy generation

In a report published in 2019, the International Energy Agency estimated the share of natural gas in electricity generation at about 23.5%, while the share of oil was about 3% for energy, and coal accounted for a share of 36.7%.

The article was written in the Al Borsa newspaper, as an outlet for the growth of the Egyptian industrial sector.