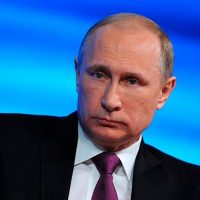 Russian President Vladimir Putin pledged that his country will do everything in its power to achieve carbon neutrality no later than 2060, stressing the importance of long-term energy market stability, especially in light of the current difficult situation.

Putin called – during a speech at the “Russian Energy Week” forum today, Wednesday – for the formulation of a comprehensive mechanism to control and balance the energy market in a manner free from political biases and cliches.

The Russian president expressed his country’s hope that in the coming decades it will be able to ensure that the net accumulated volume of greenhouse gas emissions is lower than in the European Union, noting the need to link the solution to climate preservation issues with the development of economic sectors, especially the energy sector.

Putin stressed that Russia has every opportunity to occupy a large share in the hydrogen and ammonia market as energy sources, explaining that the share of hydrocarbons in the global energy balance could drop to 60-65% within the next 25 years.

The Russian president’s article calling for the formulation of a comprehensive mechanism to control and balance the energy market was written in Al Borsa newspaper.