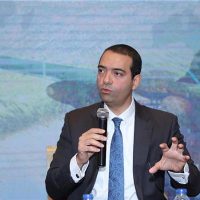 The head of Egypt’s Sovereign Fund said that the financial technology sector is one of the promising sectors that the fund considers as an investment destination, with the expansion of financial inclusion in the largest Arab country in terms of population and a promising market in which financial institutions enjoy strong financial solvency.

Ayman Suleiman added that the fund is currently studying a range of opportunities in the “fintech” sector, in which the focus is on small and medium enterprises, which the fund sees as an opportunity to maximize value.

Regarding the project that the fund recently entered into in one of the archaeological areas, the head of the Sovereign Fund of Egypt said that participation in the project is through the usufruct system, where the fund obtained the right to use the asset for a period of 49 years.

When the head of the Egyptian Sovereign Fund was asked about the percentage of the tourism sector and assets out of the fund’s total investment portfolio, he said that it ranges between 20-25%

Suleiman ruled out the possibility of the fund’s participation in any of the upcoming government offerings, saying that this contradicts the goal of the offering, which is to increase the base of non-governmental ownership.

Suleiman added that the health care sector is a mainstay in the fund’s investment portfolio, and that investments in the sector are included in the partnership system with service providers.

The article “Egypt’s Sovereign Fund” studies a group of opportunities in the financial technology sector was written in Al Borsa newspaper.