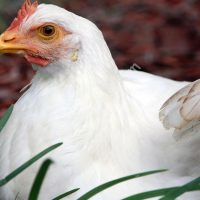 The prices of poultry, chicks, one-day old, and table eggs stabilized during today’s trading, Wednesday, 3-31-2021, at the same rate as yesterday, with poultry recording 27 pounds per kilo on farm land.
Haitham Bakhati, a poultry breeder, said that poultry prices have stabilized due to the decline in demand, in addition to the relatively high supply of farm owners.
He added that the price of poultry during sale to the consumer rises by about 3 pounds, in the governorates near the farms, and reaches 4 and 5 pounds per kilo in Cairo and Giza.
He explained that the prices of white poultry today are 27 pounds per kilo in farms, while they are sold in stores in the governorates at 29 pounds, while in Cairo the prices range between 29 and 32 pounds, and the prices of local chicken are 37 and 39 pounds per kilo.
A kilo of haunches is sold for 30 and 33 pounds, and a kilo of bani is recorded at 60 and 65 pounds, and the prices of rumi today have stabilized at 50 pounds per kilo in the local market.
Bakhati said that the prices of the one-day old white chick also recorded stability during trading on Wednesday 3-31-2021, ranging between 6.5 and 8 pounds.
“Bakhati” pointed out that the prices of “table eggs” witnessed a stability in sales rates during yesterday’s dealings in the price of one carton, so that “white” recorded 34 pounds in a carton, while the prices of “red” eggs recorded 35 pounds in a carton.
Egypt’s production of poultry amounts to 4 million chickens per day, in addition to 13 billion eggs annually, and more than 2.5 million workers work in the sector, according to previous statements by the Minister of Agriculture, Mr. Al-Qusayr.
According to the data of the Poultry Producers Union, the volume of investments of poultry farms operating in the Egyptian market is about 90 billion pounds, while the number of breeders working in the sector ranges between 50 and 60 thousand establishments, including 20 large companies.

The article, the stability of the prices of “poultry”, “chicks” and “table eggs” during the trading day 3-31-2021 was written in the Al-Borsa newspaper.

Lazhar Longo, the mysterious man.. What is the position of Tunisian intelligence on the coup of Kais Saied? | A homeland tweeting...