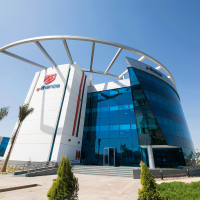 The EGX management announced the final price for the public and private offering of “e-finance for financial and digital investments” at EGP 13.98 per share.

The stock exchange added that the last date for registering public offering orders at a price of 13.98 pounds per share is on October 17.

She explained that all brokerage firms must deposit at least 25% of the value of the shares to be purchased and take the necessary measures to amend the previously registered orders before publishing this announcement.

And she was The Financial Supervisory Authority approved the request of “E-Finance for Financial and Digital Investments” to increase the number of shares offered for sale to 417.78 million shares, representing 26.1% of the company’s total outstanding shares.

On the second day of the public offering of the company’s shares, the coverage ratio exceeded 31%, after the number of shares required at the end of the session exceeded 8 million shares, out of the offered share, which amounts to 25.7 million shares as of this writing.

The Financial Supervision explained that the justification for the company’s request is that the increase in demand for shares exceeds the offered shares several times.

She emphasized that pledges should be submitted to the Stock Exchange that the main shareholders’ retention rate in the company shall not be less than the percentage specified in accordance with Article 7 of the rules for listing and writing off securities for a period of no less than two fiscal years from the date of the offering, and a letter from the Misr Clearing Company stating the freezing in accordance with the aforementioned article.

Earlier, the Financial Supervisory Authority announced that it does not object to publishing the “Offering Prospectus” for the purpose of selling a maximum of 257 million and 777 thousand shares, which represents 16.1% of the total capital of E-Finance for Financial and Digital Investments through offering on the secondary market (offering). public and private).

Last Wednesday, the company opened the door to receive subscription applications for the private placement tranche, which is scheduled to continue until today, Tuesday, and trading on the company’s shares will begin by October 20.

E-Finance for financial and digital investments announced that it had achieved unprecedented success on the first day of the subscription, after covering all the shares offered by investors.

She indicated that it is scheduled to be announced next Tuesday, the official price of the share, which was disclosed last Wednesday, at a price ranging between 12.50 pounds and 13.98 pounds per share. The Egyptian Stock Exchange and an initial offering amounting to approximately 177.77 million ordinary shares, which is equivalent to a total of 16.1% of the company’s currently issued capital. with a nominal value of 0.5 Egyptian pounds per share.

The listing will be represented in 8 issues in the Egyptian Securities Listing Table of Shares, in accordance with the rules for listing and delisting securities issued by the Financial Supervisory Authority Board of Directors Decision No. 11 of January 22, 2014 and its executive procedures and amendments, especially Article (1) bis of it, with no dealings On the company’s shares during that period from the date of registration until the start of trading on these shares, except with the approval of the Authority.

The registration shall be considered null in the event that the company does not offer its shares within one month from the date of its registration with the Authority, and items (1, 2, 3, 7) of Article (7) of the listing rules are fulfilled, unless this period is extended with the approval of the Authority in the cases it estimates. .

The registration committee indicated that a “Ticker Symbol” will be allocated to the company, which is EFIH.CA, and that the company will be housed in the “communication, media and information technology” sector.

The article The Stock Exchange announces the final price for offering the shares of “e-finance” at 13.98 pounds, which was written in the Al Borsa newspaper.