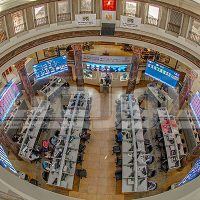 The market recorded trading values ​​of 1.5 billion pounds, through the circulation of 410.93 million shares, by carrying out 52.9 thousand buying and selling operations, after trading was done on the shares of 195 restricted companies, of which 18 shares rose, and the prices of 136 securities declined, while the prices of 41 shares did not change. Others, to settle the market capitalization of listed shares at the level of 692.2 billion pounds, losing about 18.2 billion pounds during the session.

The article The Stock Exchange closed down 2%… and its market capital lost 18.2 billion pounds. It was written in the Al Borsa newspaper.