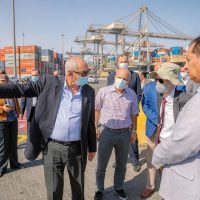 Zaki: We are pleased to cooperate with the Japanese-French alliance in East Port Said

Engineer Yahya Zaki, President of the Suez Canal Economic Zone, received Japanese Ambassador to Cairo Noki Masaki and his accompanying delegation from the Japanese JICA to discuss investment opportunities in the region as well as provide technical support to the region in various fields.

The head of the economic zone expressed his happiness with the Japanese ambassador’s interest in visiting the region and its ports and inspecting the work in it, whether in East Port Said or Ain Sukhna, and the Japanese side’s constant pursuit of joint cooperation between the two sides, pointing out that the current investment situation in Egypt is the best time as it enjoys a good climate for investment and opportunities Various fields in various fields, as well as the political leadership’s interest in encouraging serious investments, as well as projects undertaken by the state in infrastructure, electricity network, roads, communications, etc., to make Egypt a major center for investors and a preferred destination for investment.

During the meeting, Eng. Yahya Zaki gave a detailed presentation on the economic zone, what happened during the past five years, what is happening now, and the desired goals of the authority’s vision and strategy 2020-2025, as well as the target for the coming years according to Egypt’s 2030 vision. He also touched on the incentives that the authority enjoys, whether direct or indirect, especially Those that were recently issued from special rules for import and export and customs evidence that contributes to facilitating the business climate.

In the same context, Zaki said that there is cooperation between the region and the Japanese side, as the authority is pleased with the presence of the largest Japanese-French alliance operating in East Port Said Port through the establishment of the Rollover Vehicles Station (RORO), a station dedicated to cars, and it will be managed by two Japanese companies, namely Toyota Tsusho, and Nippon Yusen Kaisha International Company, in addition to the French company Poloroi Africa Logistics, which achieves the objectives of the authority to work to meet the needs of the local and regional market, from such projects.

Masaki: Japanese companies are interested in the Suez Canal projects

For his part, Ambassador Noki Masaki expressed his happiness at visiting the economic zone and his country’s keenness to support and develop cooperation relations with Egypt in various fields, especially the economic zone because of its advantages and exemptions that make it the largest competitor within the economic zones in the world.

The ambassador said that the Japanese government is very interested in the presence of Japanese investments in Egypt and focusing on investment opportunities in the region because of what we saw on the ground of existing projects and ports near the industrial areas, expressing his happiness to visit East Port Said last July, where the Japanese alliance works in one of the most important major projects in the region. .

After the meeting, Engineer Yahya Zaki and Major General Mohamed Shaaban, Vice President of the Economic Zone for the Southern Sector, accompanied the Ambassador of the State of Japan and his accompanying delegation on a field tour of the industrial developer Suez Industrial Development “SIDC”, where they were received by Eng. The Japanese ambassador is the Saraya project within the industrial developer, which is the latest Japanese project in the economic zone that is under construction to find out the latest developments and stages of implementation in it. global standards.

During his visit to Sokhna port, the Japanese ambassador also inspected the first and second basins and the ongoing development work, as well as the drilling sites for the four new basins that are being implemented, as well as the berths that will be constructed with a length of 12 km and a depth of 18 meters, and trading yards with an area of ​​5.6 million square meters.

The article, Suez Canal Economy, receives the Japanese ambassador and a JICA delegation to discuss investment opportunities. It was written in Al Borsa newspaper.