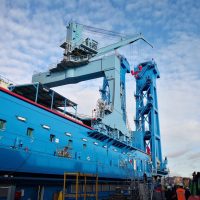 The Suez Canal Authority is preparing to receive the dredger Mohab Mamish, the latest and largest dredger in the Middle East, to join the authority’s fleet in the coming days.

It is scheduled to start its journey to Egypt next week, carried on board a heavy cargo ship from the port of Rotterdam to Port Said port.

It is expected that there will be a working team accompanying the dredging company from the Dutch company IHC to attend the operation and productivity tests in Egypt.

This step comes in implementation of the directives of President Abdel Fattah El-Sisi to work to maximize the assets of the Authority and to develop and modernize the fleet of dredges and marine units affiliated to it within the strategy of the Authority 2023.

It is noteworthy that Lieutenant General Osama Rabie, in October 2020, witnessed the inauguration of the new dredger, Hussein Tantawy, at the Krimpen Shipyard of the Royal Dutch IHC Company.

The Suez Canal Authority contracted with the Dutch IHC shipyard, which is classified as the largest arsenal operating in the field of building dredges, to build two new dredgers, after the launch of the Mohab Mamish dredger.

The two crackers are identical in design, style and technical specifications. The dredge is 147.4 meters long, 23 meters wide, 7.70 meters deep, a draft of 5.50 meters, a productivity of 3600 cubic meters of sand per hour over a length of 4 km, and a total capacity of 29,190 kilowatts.

In previous statements to the Stock Exchange, George Safwat, spokesman for the Suez Canal Authority, said that kractin will be used to carry out periodic maintenance operations in the navigation course of the Suez Canal, in addition to using it in dredging rocky soil, especially in Suez.

Safwat indicated that the authority’s fleet of dredges is the main pillar in the strategy of developing the navigational course of the canal, and maintaining the depth of the canal of 24 meters, which allows the crossing of giant ships with large submersibles despite the factors of silting, through periodic maintenance work.

He pointed out that the Suez Canal Authority seeks to diversify the authority’s sources of income by using the dredging fleet to participate in a number of projects in Africa and the Middle East region, in addition to its participation in the work of developing ports and disinfecting Egyptian lakes.

The article The Suez Canal includes the Karakah “Mohab Mamish” to its fleet. It was written in Al-Borsa newspaper.