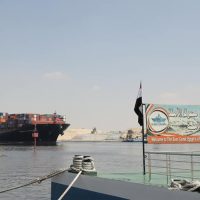 Lieutenant-General Osama Rabie, head of the Suez Canal Authority, said that the navigation movement in the canal recorded, today, Wednesday, the highest daily transit rate of transiting ships in the history of the canal, with 87 ships crossing from both directions without waiting, with a total net tonnage of 4.8 million tons.

و .كد President The authority stressed the readiness of the Suez Canal to deal with the various changes witnessed by the global trade movement after the increase in the numerical and absorptive capacity of the canal thanks to the new Suez Canal project.

He pointed out that the projects to develop the waterway of the canal are at the forefront of the work agenda during the next stage, in light of the great interest in this file from the political leadership.

The navigation movement from the north topped the giant container ship MSC ISTANBUL, with a total tonnage of 182 thousand tons, on its next voyage from Morocco and heading to Singapore. and destined for Egypt.

Today, Wednesday, the navigation movement in the canal recorded the crossing of various types of giant ships, as 18 container ships and 26 bulk ships crossed, in addition to the crossing of 18 ships of large petroleum tankers, as well as the transit of 10 ships of liquefied natural gas and liquefied petroleum gas tankers, and 15 ships of Other different types.

The article The Suez Canal witnesses the crossing of 87 ships, as the highest daily transit rate was written in Al Borsa newspaper.