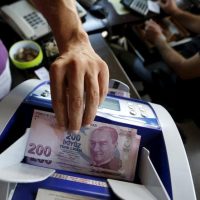 The Turkish lira fell to a new record above nine lira to the dollar on Tuesday, affected by uncertainty about political pressures to cut interest rates further and the dollar’s rise in general.

The price of the lira recorded its record level, which it reached on Monday night at 9.02 in early trading, before recording 9.01.

The lira has fallen by about 18% against the dollar since the beginning of the year, which exacerbated the rise in inflation, which reached 20%.

In response to questions from a parliamentary committee on Monday, Koccioglu said last month’s rate cut was not surprising and did little to do with selling the lira.

Koccioglu sent more soft signals in a conference call with investors last week, according to conference participants, but did not say whether he expected a further rate cut.

The article, the Turkish lira continues to decline to a record level against the dollar, was written in Al-Borsa newspaper.