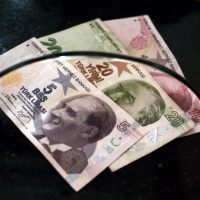 The Turkish lira fell above 8.9 against the dollar on Wednesday, approaching an all-time low hit last week on fears of an unexpected interest rate cut, Reuters reported.

The dollar rose, supported by concerns about global inflation and the expected tightening from the US Central Bank.

The Turkish lira reached 8.9250, approaching an all-time low of 8.9490 reached on September 29 amid concerns about President Recep Tayyip Erdogan’s influence on monetary policy.

The article, the Turkish lira is falling to its lowest level ever, with the rise of the dollar, was written in Al-Borsa newspaper.