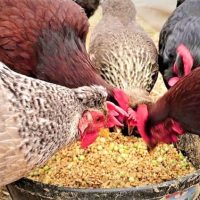 Darwish: Supplying daily quantities of “agriculture”, “catering” and “aman” at 45 pounds per carton

The poultry market has recently witnessed fluctuations in prices, but it remains at high levels, as a result of the growth in demand and the decrease in supply.
According to market indicators, poultry prices recorded their highest level ever at 32 pounds per kilo of farm land 10 days ago, before gradually declining to 27 pounds per kilo 3 days ago, to rise again to 29 pounds yesterday, Wednesday.
Poultry affects inflation indicators for Egypt as one of the most prominent basic commodities, and the increase in its prices with meat by 3.2% during last September, and the group of vegetables, dairy and others, caused an increase in annual consumer price inflation in cities to 6.6 from 5.7%, in August, according to data of the Central Agency. for statistics.
Nabil Darwish, former head of the Poultry Producers Union, attributed the rise in poultry prices in general to the significant growth in demand with the recent increase in the number of tourist delegations to Egypt, in addition to the return of the school season for the new year.
Tourist trips have improved since the beginning of this October, to the cities of Sharm el-Sheikh and Hurghada, weeks ago, after the return of Russian delegations and Britain allowing its citizens to travel to Egypt.

Darwish explained that the high demand was not the only reason for the increase in prices, as it faced a decrease in supply due to the abandonment of farms by breeders at the end of the previous cycle in August and September, after the losses that they suffered in the last 6 months.
He added: “With the rise in the costs of breeding, due to production inputs, breeders have left the market, even temporarily, until the losses are absorbed, and then return again.”
Anwar Al-Abd, a member of the Poultry Producers Union, said that tourism obtains a large amount of products, especially table eggs, and had the effect of withdrawing a large part of the market’s production.
He explained that “feed alone accounts for 70% of poultry production costs, and with the price of a ton rising above 8,200 pounds, the farms incurred significant losses due to the drop in final selling prices in a way that does not cover the costs.”
He continued that the Poultry Producers Union agreed with the Ministries of Supply and Agriculture to supply daily quantities of table eggs to the official outlets of both of them, in addition to safety outlets, at a price of 45 pounds per carton, to ease market prices.
He stated that the high prices are not due to cost alone, but brokers play a role in the lack of market discipline, as poultry, for example, reaches 37 pounds per kilo while selling to consumers in some areas, and these practices should disappear.
Abdelaziz El-Sayed, Head of the Poultry Wealth Division at the Cairo Chamber of Commerce, said that the price increase is not justified, and estimated the fair price of poultry between 23 and 25 pounds per kilo, and demanded the intervention of the regulatory authorities to curb price-increasing practices and control consumer goods markets.
Ahmed Abdel Azim, a trader, said that consumers are reluctant to buy recently because of the large price increases, which have brought them back below the level of 30 pounds per kilo of the farm.
He added that the price of municipal table eggs rose from one pound to 3 pounds, and he expected new increases in the coming period if the market supply was not regulated.
Muhammad Fouad, a trader, said that the price of a day-old chick increased from 7 to 14 pounds, and that vaccinations also come at a great cost, all of which increases the burden of production.
Mustafa Hamdan, a trader, added: “Poultry farming rates decrease in the winter, due to the spread of diseases and the high death rate, so farms reduce the number of breeding wards or the number of poultry in the sheds themselves.”

The article “Tourism” and “Schools” put pressure on “poultry” was written in Al Borsa newspaper.