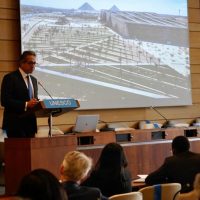 Dr. Khaled Al-Anani, Minister of Tourism and Antiquities, gave a lecture on the state’s efforts in the field of excavations, archaeological discoveries, antiquities restoration projects, the development and construction of museums, and the recovery of smuggled antiquities, at UNESCO headquarters in Paris, in the presence of 100 world ambassadors, specialists in antiquities and heritage and officials of the United Nations Educational, Scientific and Cultural Organization (UNESCO) and representatives of relevant cultural associations and institutions.

This lecture came within the framework of his current visit to the French capital, Paris.
During the lecture, Dr. Khaled El-Anany highlighted, through a presentation, the most prominent achievements of the Egyptian state in preserving its cultural heritage, and the recent inaugurations, archaeological discoveries, and archaeological projects that the state is working on.
He began his speech by briefing the attendees on the most important archaeological discoveries and developments in work related to Egyptian archaeological sites, Egyptian and foreign archaeological missions, and success stories about recovering Egyptian artifacts that were stolen and smuggled abroad. He also highlighted the latest openings of new museums and restoration projects, and the efforts of the Ministry of Tourism and Antiquities to improve visitor services at archaeological sites and museums and make them available to Prime Time Zone of determination, including the development of the Giza Pyramids area, Salah El-Din Citadel and others, in order to improve the experience of its visitors, in addition to the ministry’s efforts to raise archaeological awareness. For Egyptian citizens, especially children, and to contribute to the well-being of local communities through the promotion of local handicrafts, as well as existing projects in Egyptian sites, including projects to reduce groundwater levels, as well as the inauguration of development projects for some areas located on the path of the Holy Family’s journey in Egypt. The opening of three points on the track after they were developed in Samanoud and Tell Basta, and the development and restoration of the rest of the places is underway.
Speaking about the recent archaeological inaugurations, the Minister highlighted the opening of the restoration project of the Step Pyramid of Djoser and its southern tomb in Saqqara, which are two sites on the World Heritage List, and the opening of the first museum in Hurghada in cooperation with the private sector and Sharm El Sheikh Museum, as well as the opening of the Royal Vehicles Museum in Bulaq after the completion of develop it.
In his lecture, the minister also referred to the opening of the Al-Fateh Mosque in Cairo, the visit to the Markos Church in Alexandria, and the opening of the Jewish Synagogue in Alexandria after its restoration, all in one day, which indicates that Egypt is a meeting place for all religions and a country of tolerance.
The lecture also dealt with the development of archaeological sites registered on the World Heritage List, including the Saqqara archaeological area, which witnessed many discoveries, as well as the site of Historic Cairo, where the state is currently working on developing the site as a whole and its important Islamic monuments witnessing an entire civilization and historical era.
Dr. Khaled El-Anany also reviewed the most important archaeological discoveries, including the discovery of the cemetery and my beautiful oasis in Saqqara, and other important discoveries in Minya, Luxor, Cairo, Giza and others.
He also touched on foreign archaeological exhibitions, including the exhibition of the young king Tutankhamun, who traveled to the United States of America and France
And England.
He also reviewed the services that the ministry is working to make available to visitors at various museums and archaeological sites, including the development in the Egyptian Museum in Tahrir, the development of services in the Giza pyramids area and the opening of its first restaurant, as well as the development of services at Salah El-Din Al-Ayyubi Castle and restarting the clock in the clock tower in the Mohammed Ali Mosque Square for the first time. Once after maintenance and restoration of the tower for its own.
Regarding the file of retrieving stolen and illegally smuggled artifacts outside the country, Dr. Khaled Al-Anani, during the lecture, said that the ministry had recently succeeded in recovering many artifacts, the most beautiful of which was the golden sarcophagus of Ankh, which was returned by the Metropolitan Museum in America.
At the end of the lecture, a film was shown about the Egyptian restorers and their achievements in the file of restoration of museums, archaeological sites and temples in Upper Egypt and restoring their colors and splendor again.
The attendees were impressed by this lecture, as they thanked the Egyptian government for this tangible achievement, appreciating the efforts made by the Egyptian state to preserve its civilizational and cultural heritage, which is an important part of human heritage.

The article Tourism: Egypt pays great attention to its cultural heritage and makes a great effort to preserve it was written in Al Borsa newspaper.