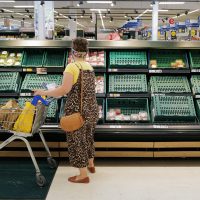 Some crises are preceded by many warnings. More than three months before brawls broke out in British gas station yards and images of empty supermarket shelves appeared on the front pages of newspapers, industry executives and government ministers met to warn of a supply chain crisis.

Executives attended the June meeting with a list of potential reforms, such as temporary visas needed to hire heavy truck drivers abroad, COVID-19 testing for drivers and extended working hours and a government campaign to urge heavy truck driver licenses to return to work behind the wheel.

Ministers did not finally agree to these proposals until the middle of last week, more than two months after the June 16 meeting, the British Financial Times reported.

About 10,500 temporary visas were issued to drivers and poultry farm workers, and British Conservative politician Charlotte Fair herself signed a letter sent to a million heavy truck drivers last week asking them to get back on the road.

At the same time, fears of the cost of living crisis grew, with the end of temporary support provided to poor families in order to overcome the repercussions of the epidemic, the trend of inflation towards 4% and the end of paid vacation schemes, in addition to the looming rise in tax and energy prices in the spring.

However, ministers remain optimistic that supply shocks are temporary and inflation will pass quickly, and that higher wages and a booming labor market in the Treasury are seen as better insulators against a cold economic winter than a luxury.

While Johnson has approved a temporary loosening of immigration rules for an additional 5,000 truck drivers until Christmas, ministers remain suspicious of some employers’ willingness to use the crisis to return to the cheap supply of drivers abroad rather than train their workers.

“I don’t think there will be much risk around Christmas time,” says one member of the Johnson administration. The low-skill, high-wage immigration model was voted on primarily in the Brexit vote.

Such optimism is not widespread in the industry. Logistics experts say the complacency at Whitehall among both politicians and officials is based on a fundamental failure to understand how deep the problems are and how long it will take to fix them.

The pandemic continues to devastate global supply chains, driving up shipping costs and doubling delivery times, as the crisis continues to impact the British economy.

Now, shipping rates from Asia to the UK have reached 14 times pre-pandemic levels, reaching $18,000 per container, according to industry analysts at Standard & Poor’s Global Platts, while transit times have doubled from 35 days to 70 days, causing In companies shipping early, thus creating additional pressures on the system.

It is noteworthy that the government’s provision of visas to drivers and poultry workers will not provide the necessary comfort in time for the Christmas-related supply chains, according to the industrial establishments.

Although the introduction of the vaccine enabled the country to largely control Covid, the risks of a re-emergence of the epidemic during the Christmas season, along with the emergence of other seasonal viruses such as influenza and other respiratory viruses, may force Johnson to consider re-imposing some restrictions.

At the same time, the most pressing problem is the dangers of severe winter gas shortages caused by a combination of reduced production in Europe, reduced gas imports from Russia, depleted storage facilities in the European Union operating at 17% below the five-year average, and prices in excess of five times the three-year average.

While Johnson remains determined to move forward and stamp out these crises, Alistair Campbell, Tony Blair’s chief media officer at the time of Britain’s last fuel crisis in 2000, says the danger Johnson faces is that his agenda is simply mired in a series of continuing crises through the fall. In light of the various sectors suffering from a shortage of employees and disruption of the supply chain in all areas.

He pointed out that Prime Time Zone are willing to give the government a great deal of freedom, but only on the condition that they are convinced that the government is trying to cross to the right place.

The article British supply chains facing certain crises ahead of the Christmas season was written in the Stock Exchange.