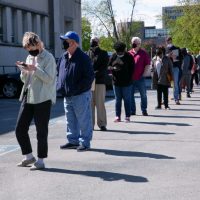 Unemployment claims in the United States fell below 300,000 for the first time since the start of the “Corona” pandemic, in a sign of the continued recovery momentum in the country with the largest economy in the world.

The data of the US Department of Labor revealed, on Thursday, that the number of initial jobless claims fell at the level of 293 thousand during the week ending on the ninth of October, compared to expectations of a decrease to 315,000.

While the average number of jobless claims in the past four weeks – which is the most accurate measure of the performance of the US labor market – decreased by 10.50 thousand to 334.25 thousand applications.

The article, “America” unemployment claims fell below 300 thousand for the first time since the beginning of the pandemic, was written in Al Borsa newspaper.