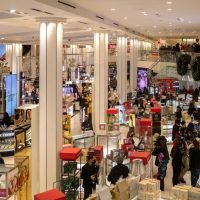 US consumer spending increased more than expected in August, but a downward revision to July data kept expectations that economic growth slowed in the third quarter as a new surge in COVID-19 infections hampered demand for services.

The US Commerce Department said on Friday that consumer spending, which accounts for more than two-thirds of US economic activity, rose 0.8 percent in August, ignoring a drop in auto sales caused by a global shortage of semiconductors, which is crimping auto production.

July data was revised down to show that consumer spending fell 0.1 percent instead of rising 0.3 percent as previously reported.

Economists polled by Reuters had expected consumer spending to increase 0.6 percent in August.

The spending likely received a boost from back-to-school shopping and tax credit payments for children.

On the other hand, inflation maintained its upward trend in August. The PCE price index, which excludes food and energy, rose 0.3 percent after rising by the same margin in July.

In the 12 months to August, the so-called core PCE price index rose 3.6 percent, similar to the increase in July.

The article US Consumer Spending Beats Expectations in August and Inflation Rises was written in the Stock Exchange.