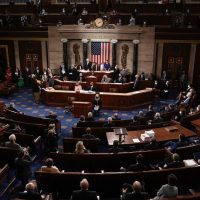 The US Senate has approved legislation to temporarily increase the federal government’s $28.4 trillion debt ceiling to $28.8 trillion, an increase of $480 billion.

According to analysts, this gives more time for the Treasury to pay its obligations until the third of December.

The article the US government postpones a historic debt default until December was written in Al Borsa newspaper.