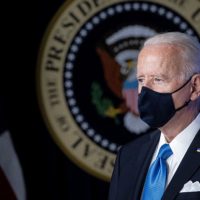 US President Joe Biden said last month’s jobs report reflected significant progress in getting the economy back on track, even though the number of new jobs was lower than expected.

“Today, for the first time since March 2020, the unemployment rate in the United States has fallen below 5%,” Biden said in statements at the White House.

The US economy added 194 thousand jobs last September, which came less than expectations of 490 thousand, while the unemployment rate fell to 4.8% from 5.2% previously, and against expectations of 5.1%.

Biden disagreed with markets being disappointed about the number of jobs added, saying: “Total monthly new jobs are declining, but if you look at the trend, it’s strong.”

The US President also drew attention to the strong increase in wages, saying: “In September we saw one of the largest increases recorded in the average wages paid to working Americans.”

Average wages for workers in the United States rose in September, on an annual basis, by 4.6%, as companies sought to attract employees in the face of an ongoing labor shortage.

The US main article: The latest jobs report reflects a significant improvement in the economy written in Al Borsa newspaper.