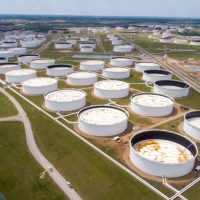 The sources added that crude stocks jumped 12.8 million barrels in the week ending on the fifth of March, while analysts polled by Reuters had expected an increase of 816 thousand barrels.

Crude stocks at the delivery center in Cushing, Oklahoma, increased by 295,000 barrels.

Distillate stocks, which include diesel and heating oil, fell by 4.8 million barrels, compared to expectations for a decrease of 3.5 million barrels.

The American Petroleum Institute did not comment on the numbers

The article US stockpiles pose a new threat to oil prices was written in the Al-Borsa newspaper.

The hacking of sensitive information for 6 countries, including Iraq, Jordan and Egypt, through a major penetration..Who is behind it? | A...

Hussein Al Jasmi congratulates Turki Al Sheikh .. and the audience predicts the worst for the head of the Entertainment Authority! | ...

Egyptian bride attended by the angel of death after entering the marital nest an hour! (watched) | A homeland tweeting outside the...

What is the history of the “No to the Signature of Tribal Sheikhs” tag in the Sultanate of Oman!? | A homeland...

Fadel Shaker comments on the one-year anniversary of the “biggest crime” against Beirut and the Lebanese… What did he say!? | A...