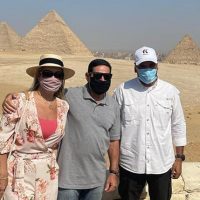 Within the framework of the official visits recently witnessed by various Egyptian archaeological sites and museums, the Giza pyramids area received today General Hamilton Mourao, Vice President of the Republic of Brazil and his wife.

They were received by Mr. Ashraf Mohi, director of the pyramid’s antiquities area, who took them on a tour inside the area, which included the Great Pyramid, the Sphinx, and the panorama area.

Mr. Ashraf Mohy explained that the Vice President of the State of Brazil and his wife were never impressed by what they saw of the grandeur of the construction of the Great Pyramid, as well as the sculpting of the Great Sphinx with such great accuracy, and they were keen to take memorial photos in the Panorama area, expressing their happiness with this visit.

The article, the Vice President of the Republic of Brazil visits the Giza pyramids area was written in Al Borsa newspaper.