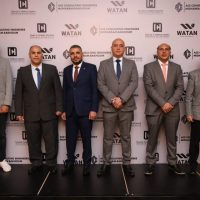 “Watan Real Estate Development” launched the “Orient commercial-administrative-medical” project in the Administrative Capital, with investments amounting to about one billion pounds.

Sherif El Hawary, Executive Director and Chairman of the Board of Directors of Watan Real Estate Development Company, said that the project is being built on a total area of ​​2,319 square meters, and consists of two underground floors, a ground floor, and ten frequent floors.

The project will include 300 commercial, administrative and medical units, provided that the ground floor, the first and the second will be allocated to the commercial units, and the rest of the floors will be allocated to the administrative and medical units, in addition to establishing an underground car park with the entire area of ​​the basement floors to serve the project’s pioneers.

Al-Hawary added that choosing the new administrative capital as the starting point for the company and establishing its first projects in it came after a thorough study of the real estate market and the promising investment opportunities offered by fourth-generation cities.

He explained that the Administrative Capital will provide a stimulating environment that will push activities and businesses to further growth, especially with the beginning of the economic recovery and the resumption of strong growth of the Egyptian market after a difficult year in light of the Corona pandemic crisis.

He said that the “Watan” company plans to hand over the project by 2024, and one of the largest facilities management and investment companies is currently being contracted to serve the project. An Arab Consulting Engineers Company “Moharram-Bakhoum” has also been contracted to take over the responsibility of the construction consultant, and Hafez Engineering Consulting Office to take over Responsibility for the architectural design and engineering consultant for the project.

The article “Watan for Development” is launching the “Orient” project in the Administrative Capital with investments of one billion pounds, it was written in the Al-Borsa newspaper.