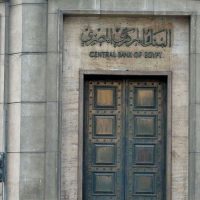 The Central Bank said that there are several factors that limited the rise in the current account deficit during the last fiscal year, foremost of which is:

2- Petroleum balance:-
The Central Bank stated that the improvement of the oil balance deficit to be limited to only $7.6 million, compared to a deficit of $421 million, which limited the widening of the current account deficit, and stated that this improvement in the deficit is a result of the following:

2- Transportation receipts decreased by 4.5% to $7.5 billion, compared to $7.9 billion, as a result of the decline in airline company receipts, as well as port services receipts affected by the Corona pandemic.

3- The non-oil trade deficit increased by 16.7% to reach $42.1 billion compared to $36 billion, driven by an increase in non-oil imports by $8.2 billion to reach $62.1 billion, as a result of an increase in the imports of intermediate goods $3.3 billion, raw materials $736.3 million, and investment goods 529.3 million These inputs contribute to improving the growth rate of the Egyptian economy.

The rise in imports came at a time when exports increased by 2.2 billion dollars only to record 20.1 billion dollars, and most of the increase came in electrical appliances for home use, inorganic compounds, wires and cables.

4- The increase in the investment balance deficit by 9.2% to reach $12.4 billion, compared to $11.4 billion, contributed to the widening of the current account deficit, and its increase came as a result of:

A- Increasing investment payments by 676 million dollars to reach 13 billion dollars, reflecting the profits achieved on foreign direct investment, interests and distributions on foreign investments in Egyptian bonds and securities.

What are the factors that limited the rise in Egypt’s current account deficit last fiscal year? It was written in Al Borsa newspaper.