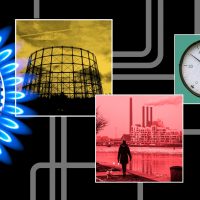 If you live in Europe or the United Kingdom, the cost of natural gas to heat your home this October is at least five times more than it was a year ago, and the reasons for this are as diverse as the Dutch earthquakes, China’s attempt to clean its air, and the power policy of the Russian President Vladimir Putin.

But the impact is clear, as record prices paid by suppliers in Europe and a lack of gas supplies around the continent have raised fears of an energy crisis if the weather is cooler than usual.

Households are already facing higher bills while some energy-intensive industries have begun to slow production, limiting optimism about the post-pandemic economic recovery, according to the British Financial Times.

While some in the gas industry believe the price hikes are a temporary phenomenon caused by the economic turmoil due to the pandemic, many say they highlight structural weaknesses in a continent that has become so dependent on imported gas.

Europe has two primary options for additional gas supplies given its heavy reliance on imports, says Tom Marzik Manser of consultancy ICIS, and those options are Russia or LNG shipments, but neither of these sources has worked as well. Meditate Europe during this crisis.

The shift to cleaner energy such as wind and solar has had the effect of increasing gas demand, but the long-term goal of creating net-zero economies in the UK and Europe has also limited investors’ willingness to invest money in developing supplies of fossil fuels that they believe could Significantly expires within 30 years.

In light of this, domestic gas supplies in Europe, which have fallen due to decades of rapid development, have fallen by 30% in the past decade.

Europe’s attempts to be a global leader in climate change arguably have fueled broader changes in the market, prompting the fast-growing economies of Asia to move away from coal only to find that countries like China and India are now competing for the same supplies of LNG that Europe has come to depend on. From countries including the United States and Qatar.

The gas industry used to operate almost entirely on point-to-point pipelines, which kept regional competition to a minimum, and the rapid growth of the LNG industry suggests that seaborne shipments have now created something akin to a similar global market for petroleum.

European governments argue that “volatile” gas prices reinforce the need to speed up the transition to renewable energy, but there are concerns that the problems could lead to a backlash against renewables if consumers begin to believe that the price of the energy transition is too high. The world remains relatively stable throughout the year with only small fluctuations between seasons, while gas demand is much stronger each winter due to its role in heating the home.

While demand for gas continues throughout the year, its peak is much higher in winter especially in the northern hemisphere, where about 40% of total UK gas consumption goes directly to home heating, and condenses dramatically in a period of five to six Months.

The industry manages these courses in different ways. Storage is the key. During this cycle, gas is pumped underground during the summer months when demand is low, to be used when the weather turns cold. The other cycle is access to fluctuating supplies that may rise or fall as needed.

However, one of the big problems for the UK and Europe is that the main sources of these supplies are not operating as they once were, creating the conditions for more volatile gas prices.

The Netherlands has created Europe’s largest gas field, Groningen, to be a significant gas supplier, with production increased or curbed to help balance supply and demand, thus allowing other gas fields to produce freely throughout the year. Starting to shut it down, it’s now pumping three-quarters less than it did in 2018.

The UK faces a similar problem. It has far less storage capacity than most of Europe, a situation made worse by the closure of the storage facility off the east coast of England three years ago, which reduced UK storage capacity from 15 days of winter demand. to five days at most.

The good news for Europe is its ability to import more LNG than any other region, with Britain importing about 20% of its gas in 2019 through LNG shipments, with pipeline flows from Norway and the European Union to offset the drop in domestic production.

However, the bad news is that Asian demand for gas has grown very quickly, increasing by 50% over the past decade, and then securing LNG shipments becoming more difficult in 2021, so what was supposed to be a reliable source of flexible supplies It suddenly became much less.

Arguably, the most important factor in all of this is Russia. The continent of Europe gets more than a third of its total gas supplies from Gazprom. Their relationship has developed together decades ago, but has recently been turbulent.

Europe may face greater competition in the long run for gas supplies, as Russia began supplying China with gas two years ago, but it is fueled by fields that were never used to supply Europe.

What is driving the energy crisis in Europe? It was written in Al Borsa newspaper.