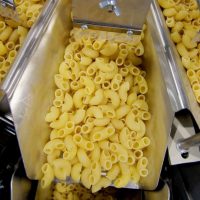 The winds of global prices for the wheat crop blew the industries that depend on its extracts, including pasta and baked goods, and put pressure on the export sector by curbing foreign competition.

At the same time, companies are betting on the new program of export support to ease the severity of the crisis and to become a lifeline from the accelerating rise in manufacturing costs, and the market’s non-acceptance of increases.

Alaa El-Bahy, Chairman of the Board of Directors of Fancy Food Company, which specializes in the production of frozen pastries, said that the rise in wheat and sugar prices has raised industry costs by no less than 10%, and the company seeks to absorb the increase, especially since the market will not accept it under the current economic conditions.

He added that the company relies primarily on the tourism sector for its sales. As a result of the negative effects of the Corona pandemic and the suspension of tourism, the sector was affected.

Sales also depend on customers from the rich segments.. Therefore, it is preferable to use premium types of flour, and the company cannot reduce the cost by changing the quality of the raw materials used.

El-Bahy pointed out that the market stopped during the first period of the Corona pandemic .. But it has recently returned to recovery thanks to domestic tourism and the gradual return of the global tourism movement, knowing that sales directed to the final consumer do not represent a large percentage of the company’s sales, because the culture of consuming frozen pastries is not widespread in Egypt. .

He continued, “The sector’s exports will not be affected by the increases in international wheat prices, as the increases will come to all producing markets.”

But the additional cost due to the bad shipping conditions in the recent period due to the events of Corona varies from country to country. The cost of other factors, such as the manufacturing process itself and lead times of raw materials, are currently against the sector.

The last tender price is $339 per ton

Ahmed El Sebaei, General Manager of the Egyptian-Swiss Company specialized in the pasta industry, estimated that wheat prices rose this year between 25-30% compared to last year, and this reflected negatively on industries related to the crop, especially pasta, which is a basic commodity.

The crisis lies in the fact that Egypt is the largest buyer of wheat in the world, and the prices of the last tender offered by the General Authority for Supply Commodities amounted to about 339 dollars, and it was in mid-September.

He added: “The local situation is different from what it was at the beginning of the Corona pandemic, as demand has declined, the purchasing power of consumers has decreased, and consumer habits have changed in general, and the citizen has become more careful.”

Al-Sibai said that the rise in raw materials prices will not be tolerated by the manufacturer for long, and the cost will be charged to the goods gradually, in order to avoid shocking the consumer with the increase in one go.

He explained that the rise in wheat prices globally began in the second half of the year at the beginning of last July, and the price of flour at the time was 5200 pounds per ton, it increased to 6400 pounds currently, which is an unprecedented increase, which was reflected in the price of a carton of pasta, which rose by an average of 3-5 pounds. , according to quality and weight.

He added, “The same situation happened in exports, especially those imported by African markets, and they are greatly affected by price changes.”

The company is currently looking for new suppliers of raw materials at lower prices on condition of quality, in order to contain the price increase that has been going on for 3 months. It is also looking for ways to save in supply chains to reduce industrial costs.

Alaa Ezzat, head of the Egyptian Emirates Company for Food Industries, said that the price of a ton of flour rose to 6,300 pounds on average, affected by the rise in wheat prices, about $120 to $340, including shipping costs.

He added that the rise in flour prices came in parallel with the increase in the prices of packaging materials and international shipping prices, whether at the level of importing raw materials or exporting finished products.

Ezzat explained that the market is currently unable to absorb the high price of pasta, whether locally or in exports, as the consumer does not look at the changes in the global market and its impact on the cost of the product… but is more concerned with the price of the commodity that he will buy.

He continued, “Had it not been for the export support, the company would have stopped exporting completely due to the high price of the ton at such rates that the African market would not be able to bear it.”

Until the export subsidy, it absorbed the difference in cost and the company succeeded in increasing its prices at slight rates so as not to lose the African market as a main market for local pasta exports.

The actual cost of a ton of pasta, according to Ezzat, ranges between 570-580 dollars, while the African markets do not accept more than 520-530 dollars, as they used to get it at 470 dollars per ton before that.. an increase of 100 dollars per ton is a strong and sudden rise.

He stressed that the same applies to the local market, as the consumer no longer accepts that a bag of pasta rises from 3.5 to 5 pounds, but he may accept it if it gradually increases to 4 pounds, for example, as a start.

Ezzat explained that the Turkish product still retains its old price, and the increases are always at slight rates, whether within the Egyptian or African market.

He attributed this to the availability of a large stock of wheat at old prices, and with the rise in export support in Turkey, competition intensified, other than that Turkey owns wheat ore of semolina and flour for pasta, which saves them a large and influential cost in the final price.

Turkish pasta depends on 100% local raw materials, which gives it a comparative advantage compared to its Egyptian counterpart, as Egypt relies on flour from imported wheat.

He added that providing raw materials locally will be a strong boost for any Egyptian product, as it will eliminate the cost of international shipping at the very least, which has become variable and expensive, and strongly affects the cost, in addition to not being directly linked to international prices and their sudden changes.

A commodity with a low profit margin

Tarek Sami, director of export at Regina, confirmed that the company’s exports were affected by the rise in wheat prices globally, and the impact was evident in the first nine months of the year, expecting the decline in external demand to continue during the current October.

He explained that pasta is a basic commodity and its profit margin is low, and companies cannot absorb the cost increases through it compared to other various products sold by the piece.

He added, “The price of a ton of wheat is rising to record an average increase of 100 pounds per week, which confuses companies and makes them unable to calculate their cost and change their prices, especially with their connection to external contracts.”

Samy said that the wheat increases raised the manufacturing cost of a ton of luxury “spaghetti” to $600, compared to values ​​ranging between $430-420 two months ago.

This negatively affected the sector, as shipping prices jumped from 600 to 1,600 dollars per container, which affected the volume of exports during the recent period, and it came at a bad time, and therefore companies will miss the opportunity.

This is the period of the year when the demand for the product is usually high in Africa and with the preparations for Christmas during the months of August, September and October for shipments to arrive before November.

He added that customers did not understand the rapid and successive increases in the prices of products, especially since the pasta product did not witness such jumps in a short time.

He explained that the advantages provided by the new program for export support in terms of product support, as well as the provision of 80% shipping support to Africa, will stimulate the continuation of exports to the continent, especially since its growth opportunities are good compared to European and Arab countries.

He stressed the importance of benefiting from the state’s orientation to support joint relations with the countries of the brown continent, which will give with time greater opportunities to rely on the Egyptian product and expand its shares there.

The article, “The Wheat.. The password for the “pasta revolution” was written in Al Borsa newspaper.