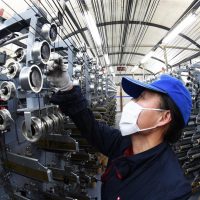 In light of the battle between supporters and opponents of the growth target for the Chinese economy, a compromise has emerged, which is a less than usual goal to be achieved more easily.

There is a contrasting relationship between China’s leaders and the GDP target they have set nearly every year since the 1990s, which has been celebrated as the key to mobilizing the millions of bureaucrats competing for promotions by increasing growth rates in their provinces.

This growth is also blamed on social evils from pollution to overinvestment and bogus statistics.

Bloomberg News reported that the uncertainties caused by the outbreak of the epidemic led Beijing to abandon the numerical target last year, and there were expectations that party leaders would do the same for 2021, but instead Chinese Prime Minister Li Keqiang set a goal to achieve Growth in excess of 6%, with annual targets likely to at least 2025.

The growing awareness of environmental damage caused by the relentless pursuit of gross domestic product – a measure of the value of newly produced goods and services in the economy – has also led the central government to warn of over-reliance on the target approach for more than a decade.

Other ideas were circulating in the minds of executives, who competed to overcome national goals by pursuing investment projects that were often wasted, partly due to the promotion evaluation system that prioritized growth, and the problem worsened after the global financial crisis, as banks opened the doors to credit. .

Meanwhile, investment banks, including GBMorgan Chase and Nomura Holdings Inc., predict that there will be no growth target this year, but only days before Prime Minister Lee’s speech at the National People’s Congress, there was a downturn.

Well-connected economists have declared that setting a specific growth target is necessary for it to become an anchor for the economy, with the possibility that politics will get muddled without it.

Zhang Lichun, a researcher at a central government think-tank, told state media that the quality of the economy is not supported without a set pace of expansion.

Those in favor of dropping the growth goal say other goals should be prioritized, such as increasing household income, investing in education and technology, reducing debt levels or reducing carbon emissions.

Although it has not been dropped, this year’s growth target is the least ambitious in decades, and China can easily achieve it only by maintaining current levels of economic output, due to the recession caused by the epidemic in the first half of 2020.

Meanwhile, economists, in a Bloomberg survey, predicted a 8.4% expansion in economic growth for 2021.

In an interview with Bloomberg TV, Michael Pettis, a fellow at the Carnegie Tsinghua Center in Beijing, said: “I think this is a much better number than 8%, which if it were put back as target growth would have been a terrible mark, but 6% could be managed with growth. High quality, anything else that requires a significant increase in non-productive investment, and of course debt.

For the first time in decades, China’s five-year plan to 2025 lacks a medium growth target, but there are annual targets that will be met.

The deputy director of China’s top government planning agency, Hu Zukai, said recently that the gross domestic product is still a key indicator, but judging the annual economic situation is easier than judging a five-year forecast.

In part, the retention of the target reflects how difficult it is to find an alternative to assess the performance of millions of local officials in China. Metrics that combine economic and environmental goals have undergone local testing but failed to exceed them.

An alternative target is often suggested, unemployment, which is not reliably measured in China and can be manipulated by local officials by ordering government companies to add employees to the payroll without paying their wages.

In general, if the GDP target cannot be eliminated entirely, the level of focus on it can be reduced. This has been the strategy followed since Chinese President Xi Jinping assumed the leadership of the Party in 2012.

The following year, the powerful Organization Department of the Communist Party warned against simple reliance on GDP growth to assess officials, and since then references to GDP have receded in the party’s official newspapers.

The number of provinces that repeatedly failed to achieve national growth targets rose during Xi Jinping’s reign, with no clear political consequences for their leadership, according to Huzi Song, a research fellow at the Paulson Research Institute of the United States.

In addition, the Chinese provinces also adjusted their GDP targets, which were always well above the national target.

After decades, targeting the growth rate has become partially restricted, everyone hates it, but everyone understands it.

The article Why can not China give up its growth target? It was written in the Stock Exchange newspaper.