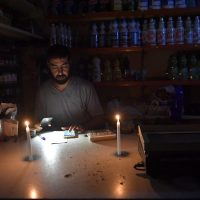 On Friday, Director of the Mashreq Department at the World Bank Group, Saroj Kumar Jah, affirmed that helping the Lebanese government address the electricity sector crisis is a top priority on the Bank’s agenda in Lebanon.

This came when Lebanese Finance Minister Youssef El-Khalil received a delegation from the World Bank headed by Saroj Kumau Jah.

In a statement to reporters after the meeting, Kumar Gah said that the research focused on a number of very critical issues that Lebanon is facing and how the World Bank Group can support Lebanon.

He added that helping the government address the electricity sector crisis tops our agenda and we are ready to help the government face challenges in this sector, move forward with reforms and help increase power generation in the country, and also work with partner countries to bring gas and electricity to solve the problem.

EDL is unable to provide power supply due to the lack of fuel and the inability of the production plants to produce the full required energy, which led to raising the rationing hours to exceed 22 hours per day, while private generators are no longer able to secure the diesel needed to cover the hours of power outages.

The World Bank official expressed the Bank’s readiness to cooperate with the Ministry of Finance in terms of macroeconomics, fiscal policy, private sector development and other reforms, stressing support for efforts to address crises in Lebanon and implement urgent reforms quickly.

Kumar Jah expressed the World Bank’s desire to be a partner in efforts to return Lebanese children to school and education, considering it a very important matter.

In this context, a statement issued by the office of the Minister of Education and Higher Education, Abbas Al-Halabi, said that he met with Kumargah today and discussed with him assistance in the issue of returning to schools and providing its components and possible incentives to ease the burdens on institutions, teachers and parents and ensure a safe school year.

In a report issued earlier this year, the World Bank suggested that Lebanon’s current economic predicament would be among the 10 most severe crises, and perhaps one of the three most severe in the world since the mid-nineteenth century.

The article The World Bank: Helping Lebanon deal with the electricity crisis is our top priority. It was written in Al Borsa newspaper.