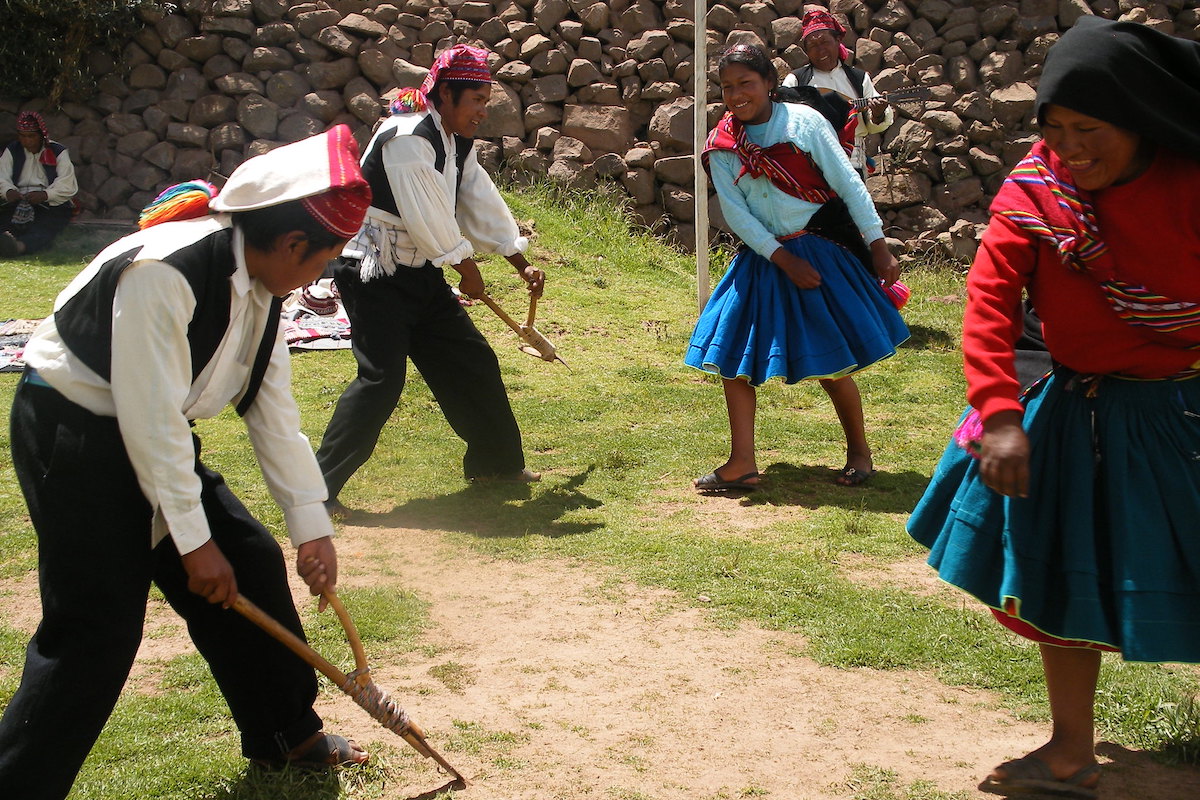 Inhabitants of the island of Taquile, Peru

Unlike what happens in various parts of the planet, on the Peruvian island of Taquile, the value of a man is not measured by his ability to hunt or fish, but rather to weave.

Alejandro Flores Huatta, 67, was born on the small island of 1,300 inhabitants on the Peruvian side of Lake Titicaca, a three-hour drive from Puno – the nearest town.

Flores learned to weave as a child, being taught by his older brother and grandfather, using the thorn of a cactus as a needle.

“Most people learn to observe. As I didn’t have a father, I learned to see my brother and my grandfather, little by little”, he said.

The island of Taquile is famous for its textile products. The women usually braid the fabric and take care of the sheep that provide the wool, while the men are responsible for producing the island’s woven caps.

Or paper two chullos as a symbol of masculinity

The hats, known as chullos, have cultural significance and play a crucial role in the island’s social structure: allow men to demonstrate their creativity in addition to identifying their marital status, their dreams and their aspirations. Some even serve to represent the state of mind.

It is a tradition that the local population has been striving to preserve.

The island was relatively isolated until the 1950s, which contributed to keeping its cultural heritage and way of life intact. Locals follow the ideal Quechua mantra of “Love your, love llulla, love qhilla” (“don’t steal, don’t lie, don’t be lazy”).

The island’s inhabitants are traditionally farmers, with the island’s six communities alternating between potato, corn, bean and barley fields on mountain slopes. They also raise sheep, guinea pigs, chickens and pigs on land while fishing in the waters.

Tourism, on the other hand, only began to gain a new lease of life in the 1970s, giving locals a new source of income as there are thousands of visitors annually. Tourists often stay in simple, family-run accommodations, participate in the harvest and sample local specialties such as fried trout with potatoes and rice, beans and mint tea. They also buy the famous handmade textile pieces.

In 2005, Taquile’s textile art was considered cultural heritage intangible asset by UNESCO, the UN arm for culture and education.

Alejandro Flores is one of the seven men on the island recognized as a Textile Master, as well as the island’s president, Juan Quispe Huatta.

The tradition has existed for about 500 years, with roots in the ancient civilizations of the Incas, pukaras and collas.

The children of the island learn to weave from the age of 5 or 6, with the learning being transferred by the elders to the next generation.

The first chullo made by boys is always white, and later they start using sheep wool dyed with local plants and minerals, in a method that is refined until the child has mastered the technique. It’s a slow process, with even the most experienced needing almost a month to produce a chullo, due to the intricate patterns, which reflect agricultural, seasonal and family issues.

You chullos also have a key role in the task of uniting young couples. Men are chosen based on their ability to successfully weave a chullo with small needles.

Second Flores, a “good catch” is a man capable of making a chullo of wires so close that it can hold water when turned upside down.

Flores proudly says that his chullo could retain water for up to 30 minutes without letting any drop run, something that would have impressed your wife, Theodosia Mark Willy, when they meet, 44 years ago.

“girls look for the best chullos. Whoever has a good hat is more likely to get a girlfriend faster”, explains Juan, adding that it is usually a community show when a future father-in-law checks the knitting skill of his potential son-in-law.

although each chullo be as unique as who produced it, iconography and colors are often repeated.

Normally, there is always a six petal rose, in reference to the six communities on the island. There are also birds such as the Cattle Egret and the Condor and animals such as the sheep, as well as agricultural symbols. The red wool represents the carnage that took place in the past, and the blue is a tribute to Mama Cocha, as the locals refer to the lake that supports the community.

Although the bride and groom produce their own chullos, those that are used on the wedding day are presented by their groomsmen, as a kind of initiation into adulthood. “Only a man who knits a chullo very good can be called man”, says Flores.

In turn, women tend to weave the colored ones chumpis – belts that are presented to your groom on your wedding day. The process is deeply personal: the woman’s hair is sewn into the belt, in its inner layer.

In the case of unmarried young people, the inside of their chumpi contains their mothers’ hair.

The illustrations on the belts often mirror those of the chullos and are specific to each family or part of the island.

The female skill of chumpis it is also passed from generation to generation, explains Theodosia. In addition, the belts have a functional purpose, as a back support during manual agricultural work.

Adaptation to the pandemic

Although the island is isolated from civilization, was not spared from covid-19. The region was completely closed to visitors for 12 months, cutting off an important source of income for the residents and forcing them to rely exclusively on agriculture.

Currently, the effects of the pandemic are also already represented in the chullos being made by the younger generations. Juan explains that a boy recently knitted the image of a circle with coronavirus spikes.

For Alejandro Flores, Juan and the rest of Taquile’s knitters, recent changes make it even more so. most important to preserve the culture and local traditions, especially since their Quechua dialect is not written.