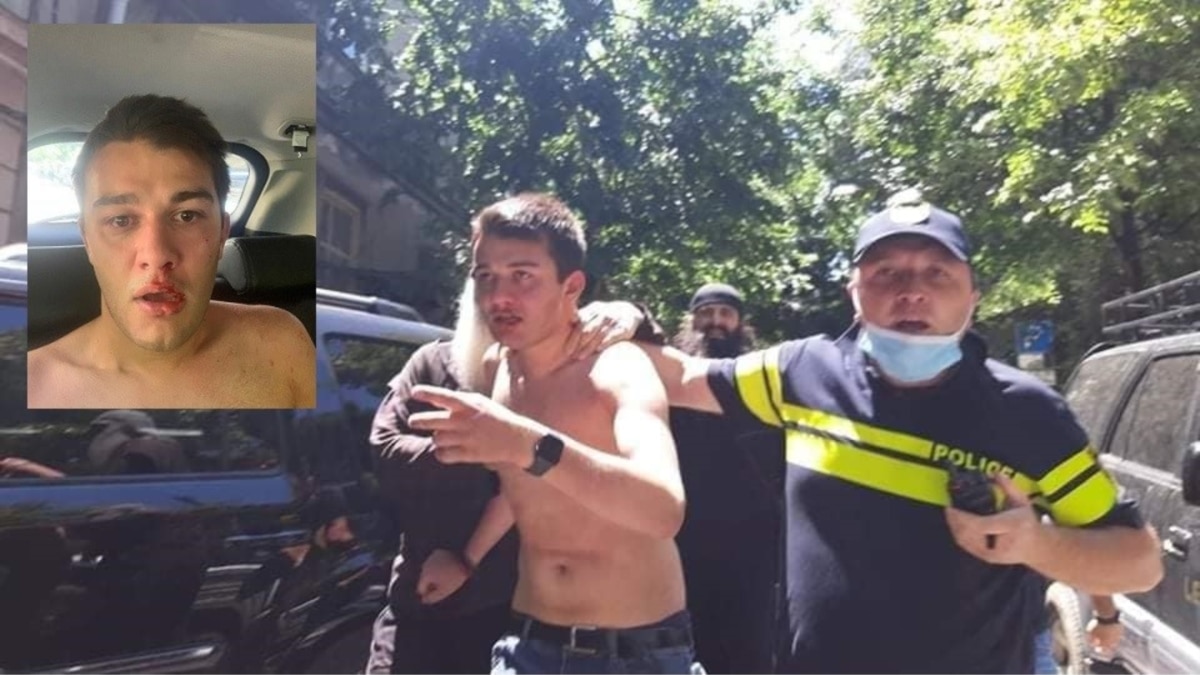 At the instigation of Prime Minister Irakli Garibashvili and the Georgian Patriarchate and the inaction of the Ministry of Internal Affairs, violent and hateful groups brutally beat journalists and cameramen on Rustaveli Avenue, unfurled the EU flag in front of parliament and ransacked Georgian Dream opponents.

This violence, in which several thousand people were involved and to which the Ministry of Internal Affairs was completely powerless to prevent it, later spread throughout Tbilisi. Hate-motivated groups attacked people, offices, cars, beat and wounded tourists just because they wore earrings.

The perpetrators also attacked the offices of the civil movement “Shame” and the political party “Girchi”. The office of “Shame” was raided, the entrance of the office of “Girchi” was crushed with stones.

Police were unable to prevent the attack on the offices of Tbilisi Pride, Sirtskhvilia and Girchi. Activists and members of a political party were not present in the offices at the time of the attack.

Prime Minister Ghaibashvili is responsible for this aggression, who according to today’s statement gave the green light to the violent groups

“Prime Minister Gharibashvili bears the responsibility for this aggression, who, according to today’s statement, gave the green light to the violent groups.

We call on the Ministry of Internal Affairs to abide by the law and immediately stop the violence, “the civil movement” Shame “spread on social media.

Khatuna Samnidze, a member of parliament and leader of the Republican Party, also shares this assessment. “The Prime Minister’s statement directly encouraged and practically called on the violent forces to start a confrontation and an attack.

“It has been reaffirmed that this government is in direct contact with the Putinist, pro-Russian forces so that there is no opportunity for a free citizen to exercise his constitutional right in this country,” Samnidze said.

“The removal of the EU flag is the most obvious symbolic act, which accurately reflects the goals of the radicals, which the Prime Minister sympathizes with,” said Giorgi Mshvenieradze, a spokesman for the Georgian Democratic Initiative. “Equality and freedom are the enemy of our statehood,” Mshvenieradze said.

Today, at six o’clock in the evening, the “Pride March” organized by the “Tbilisi Pride” was to be held in Tbilisi, however, the Georgian Patriarchate started gathering radical and violent groups in the morning, including clergymen of different ranks of the Orthodox Church and parishioners.

Prime Minister Gharibashvili said at a government meeting at 11 a.m. that he considered “the announced march inexpedient.” Gharibashvili also said that ex-president Saakashvili and the radical opposition were behind Pride.

As soon as this statement was made, violent / hate groups started beating journalists and cameramen and raiding the offices of Tbilisi Pride, Shame and Girchi. According to unconfirmed reports, more than 20 journalists, cameramen and photojournalists were injured, four of them seriously.

The Ministry of Internal Affairs refused to protect the rights guaranteed by the participants of “Tbilisi Pride” and, on the contrary, called on them not to march “on Rustaveli Avenue due to the scale of the rallies planned by the opposing groups.”

“Those who try to establish an order different from the constitution, be it theocratic or clerical, Nazi or fascist, are hostile to equality and freedom, the enemy of our statehood”

At 15:00, the organizers of “Tbilisi Pride” announced that the “March of Dignity” would no longer take place and blamed Prime Minister Gharibashvili.

“Prime Minister Gharibashvili’s shameful, violent, anti-state and anti-Western statement, in which he shifted responsibility and vectors of aggression to activists, is a continuation of the coordinated violent, tolerant, encouraging and Russian policies of our political authorities, the Georgian Patriarchate and pro-Russian groups. “The inaction of the executive branch has put the health and lives of Georgian citizens in real danger,” Pride said in a statement.