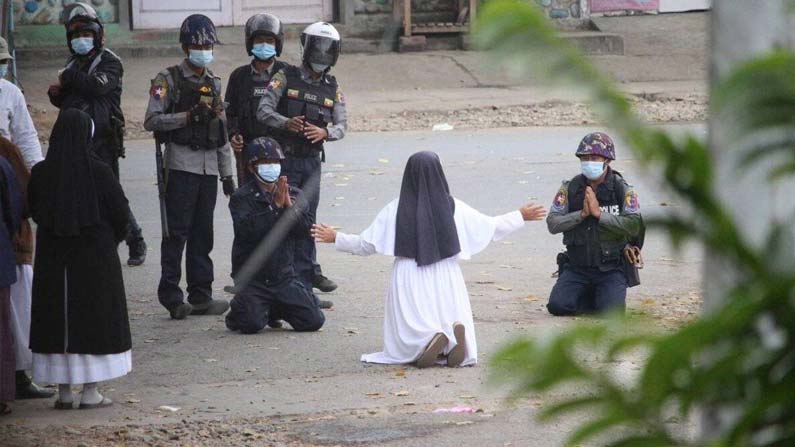 A video of a female monk kneeling in front of police in a northern Myanmar town requesting them has gone viral on social media.

A video of a female monk kneeling in front of police in a northern Myanmar town requesting them has gone viral on social media. The woman begged them not to shoot protesters protesting against the uprising last month. The video has become a hot topic on Netflix.

The woman appeared to be on her knees Monday on a street in the town of Mightkina. She looks like she’s begging, sitting on her knees in front of two cops. “Kill the protesters. Kill me,” she pleaded. “I don’t think anyone here should be bothered. I will not leave here unless you leave them, ”she pleaded. Also requested that you do not shoot children. Police in riot gear stormed a rally on Monday, removing hundreds of protesters by truck. Three others were injured. At the end of the Tang protesters last month, is trying for peace between the police, local media said. Protests continue in Myanmar as the military government steps down. The army and police are acting indiscriminately to disperse protesters. Applying vapor with rubber bullets .. breaking on the protesters. As many as 60 people have been killed so far in the violence, which has been going on since February 1. Tanamunde nun protestor shot in the head by police in the city of Yangon, killing distraught over the events. She could not bear to see the bleeding man die. Two other nuns, along with a nun named Sister Ann Rose, pleaded the same way.

A Myanmar nun, Sister Ann Rose Nu Tawng, kneeled before police officers in the city of Myitkyina to ask security forces to refrain from violence against children and residents https://t.co/ojnACSHY1I pic.twitter.com/eKSd7XM7se