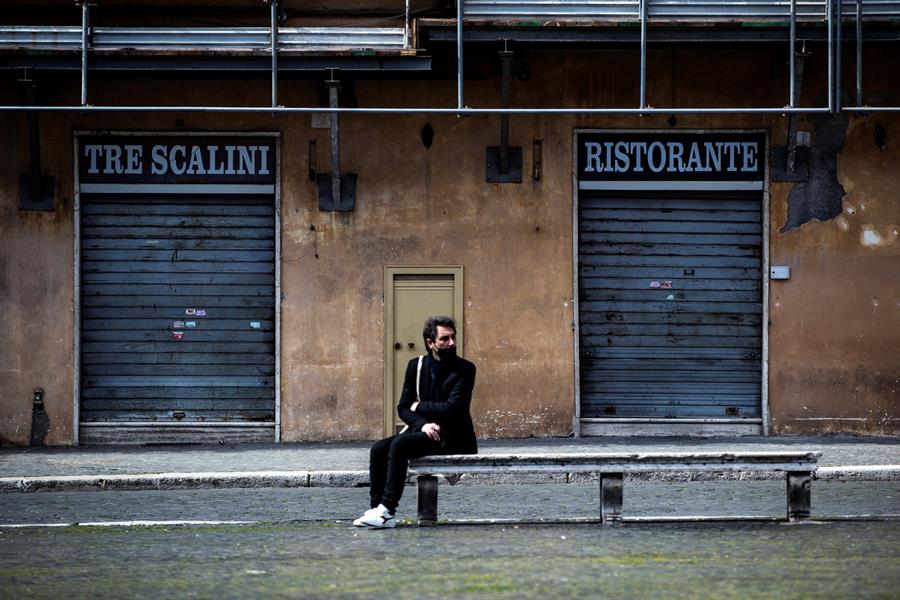 Significant increase in the number of infections with the new coronavirus has led Italy to resume measures of restrictions in the country; French and German governments are being pressured to do the same

EFE / EPA / ANGELO CARCONIScenes from Italy on Monday, 15, remember the beginning of the pandemic of the new coronavirus a year ago

Three-quarters of the Italian population returned to live in lockdown this Monday, 15. One of the most affected countries in the Europe through the new coronavirus pandemic, a Italy applied new restrictions that will be valid until April 6 in all regions of the country with more than 250 cases of Covid-19 every 100 thousand inhabitants. Thus, all schools, restaurants, bars and other businesses considered non-essential must remain closed, while the population is prohibited from leaving home except to work, go to the market, the pharmacy or the pharmacy. doctor. In addition, during the Easter all of Italy will go into lockdown as a way to discourage agglomerations and travel between different regions. During the three days of the holiday, Italians will only be able to go out on the street if they have to go to work or need to receive medical attention at a hospital. Massimo Galli, one of Italy’s leading virologists, said in an interview with the local newspaper Corriere della Sera on Monday, 15, that “history repeats itself” and “the third wave has begun”. “Unfortunately, we were all under the illusion that the arrival of vaccines would reduce the need for more drastic closings. But the vaccines did not arrive in sufficient quantity, ”he said. Understand how the situation is in other European countries:

The Robert Koch Infectious Diseases Institute (RKI), Germany, also states that a third wave of infections by new coronavirus has already started. According to the entity, the number of confirmed cases of Covid-19 over a 24-hour period it increased by 14,356, the highest daily count recorded in the country in the past two weeks. This recent increase coincides with the spread of a highly infectious variant of the virus first discovered in the UK. The new strain, known as B.1.1.7, was found to be responsible for more than 46% of new infections in Germany. Faced with this scenario, a dramatic prognosis released by RKI on Friday, 12, predicts that until the Easter the number of new cases of Covid-19 will be higher than that registered after the Natal, which was considered the peak of the second wave. In the past few weeks, Germany had been gradually easing the restriction measures as the vaccination campaign progressed, allowing schools, hairdressers and other companies to partially reopen. The goal was to achieve a full reopening by March 28. Now, however, experts recommend to the federal government and state governments that the lockdown be fully resumed. The Prime Minister Angela Merkel and other German leaders are due to meet next Monday, 22, to discuss the topic.

Meanwhile, the France it is also being pressured to return with the restriction measures to contain the advance of the new coronavirus, which infected 26,343 people last Sunday, 14. The situation is especially critical in Paris, where intensive care units were more than 95% occupied on Monday, 15. Because of the capacity, the government had to evacuate some patients to other parts of the country in special planes. “Every twelve minutes, night and day, a Parisian is admitted to an ICU bed,” illustrated Health Minister Olivier Verán. Prime Minister Jean Castex assured that the French capital will enter a lockdown if the incidence rate, which currently stands at 391, reaches 400 cases per 100,000 inhabitants. The solution, however, did not satisfy doctors and specialists, who are calling for a national lockdown. So far, the president Emmanuel Macron he resisted the pressure and imposed only a few curfew at 6 pm in France and restrictions during the weekends.

The 95% capacity of the ICU beds in Athens, capital of Greece, was a decisive factor for the return of the lockdown measures in the country, which registers an average of 2,100 new cases of Covid-19 each day. On Friday, the government announced that all schools would be closed and placed three regions of the country at the highest level of restrictions to contain the spread of the new coronavirus. In Athens, specifically, until March 22, non-essential shops must remain closed and people must obey an evening curfew.

A sharp increase in infections by the new coronavirus has also been recorded in the Hungary, which peaked at 9,444 new cases of Covid-19 last Saturday, 13th, and at Czech republic, where new infections reached 15,110 on the same day. Since the beginning of the month, the Czechs have been living under a lockdown that is expected to last until the 21st: citizens have been instructed to stay at home and have been banned from taking off between regions unless it is to work or travel essential. . In addition, the only stores that can reopen are supermarkets, pharmacies, opticians and florists. Already in Poland, 17,260 contaminations counted last Wednesday, 10, were the highest daily number since November. Poles are already experiencing strict restrictions, with schools and restaurants closed, but given the new record, the government has already said it should announce the reimplementation of measures this week.

Portugal has emerged as a major exception on the European stage. Covid-19’s new cases dropped to 577 on Friday, 12, after peaking at more than 16,000 in January. With that, the lockdown will begin to be eased gradually from next week, with the children returning to the nursery and primary school, and some museums and companies being authorized to reopen. The cafes, bars and restaurants will be able to receive the public again from the 3rd of May.