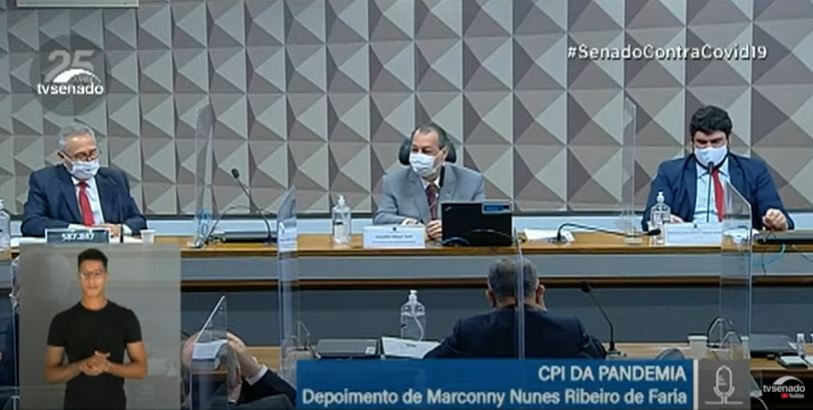 In one of the more than 300,000 pages of dialogues held by Covid-19’s CPI, a lobbyist for Necessidade says he would talk to ‘a senator’ to ‘untie the knot’ in a bidding process by the Ministry of Health

Reproduction/TV Senado/YouTubeNeed’s lobbyist is heard this Wednesday, 15, by the CPI of Covid-19

the senator Alessandro Vieira (Citizenship-SE) called the lawyer Marconny Albernaz de Faria “opportunist” and claimed that he is “putting shame on national television”. The deponent’s cell phone was seized by the Federal Police (PF) and the exchanges of messages were forwarded by the Federal Public Ministry of Pará to the CPI to Covid-19. According to the senator Randolfe Rodrigues (Rede-AP), vice president of the commission, are 310,000 pages of dialogues. In one of these conversations, Faria says he would talk to “a senator” to “untie the knot” of a bidding process for the Ministry of Health for the purchase of rapid disease detection tests. The lobbyist has refused to reveal the name of the congressman so far.

“You are a citizen who has already climbed in a sound car, on the Esplanada dos Ministérios, to shout against corruption, right? You are the same citizen who will have the nerve to arrive at this CPI and say that the message you sent, documented and expert, in which you say you have political contact, indicating a senator who would be responsible for untying the knot in this hiring so discussed here, and will not say that name? Who was the senator? There are only 81. You shouldn’t be in a truck, because you’re just another opportunist in this gray area of ​​Brasília, this interaction of lobbyists, authorities who allow themselves to be corrupted and bad politicians. You’re in national shame because of you, not my speech. He participated in negotiations and does not have the courage to say the names of those involved”, said Alessandro Vieira (Cidadania-SE).