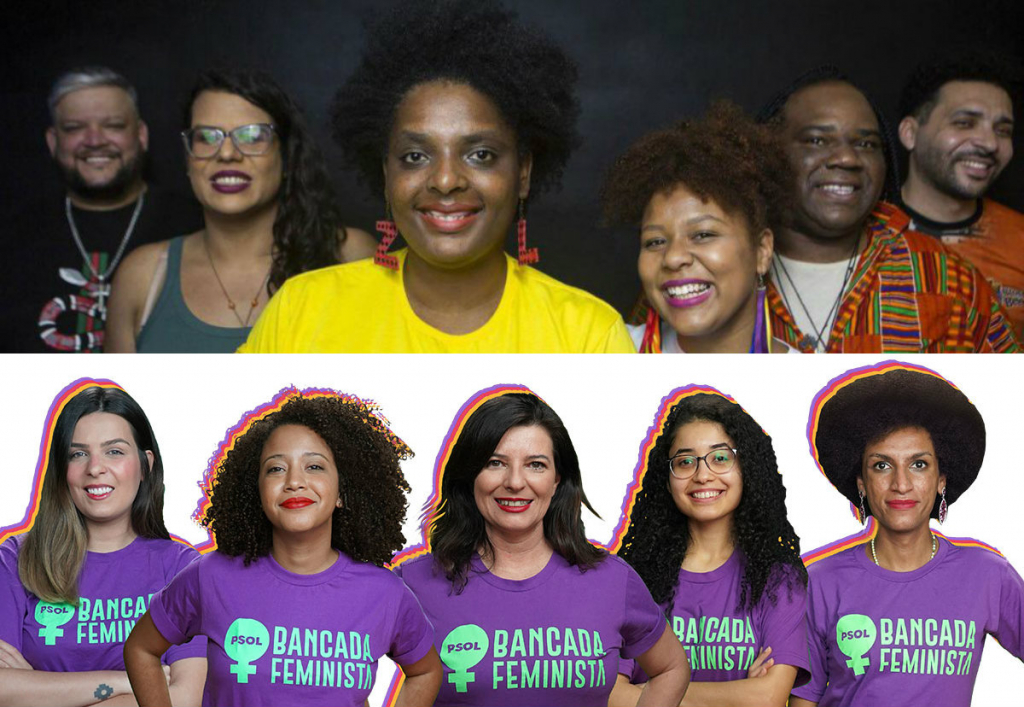 With guidelines ranging from anti-racism to non-privatization, the Feminist Bench and Quilombo Periférico project opposition to the government of Bruno Covas (PSDB)

Collective candidacies – a model of possible mandate in which an individual undertakes to share decisions with a network of employees – appeared timidly in the Brazilian ballot boxes in 2016, became popular in the 2018 election and gained ground in the city of São Paulo in the last few years. elections. In 2020, two of the 55 names elected to the City Council of the most populous city in Brazil are made up of collectives: the Quilombo Periférico, with activists from the black movement on the outskirts of the city, and the Feminist Bench, a group that defends the plurality of agendas aimed at women. In addition to the militancy days and being affiliated to the Socialism and Freedom Party (PSOL), the groups have in common the desire to occupy the Legislature with bodies and agendas different from the usual ones. In the elections that won, the collective candidacies try to increase the low statistics that show a house made up of 24% women and 20% black or brown people in front of a city formed by 52.4% female population and 35.3% black people.

Despite not following a “legal rule”, collective candidacies work in practice like any other, having the right to one vote on the agendas of the City Council. Behind the scenes, however, they are formed by a group of people, allocated in official positions within the offices, who deliberate on decisions. In the case of Quilombo Periférico, the group consists of six people; at the Feminist Bench, for five. All the positions held within the cabinet by the co-councilors are for existing functions, which would likely be filled by commissioned advisors appointed by the elected candidate. “The five of us are going to work in person. Silvia [Ferraro], who was the person chosen to be the representative in parliament, is the one who will take the votes, who will be present at the sessions together with one of us. I don’t know if everyone knows, but the parliamentarian can always be with an advisor with him in the sessions, so let’s rotate. But all of us will always be at the Feminist Bench office ”, explains co-councilor Dafne Sena in an interview with Young pan.

In addition to participating in meetings and sessions together, the groups also deliberate on agendas and decide the votes at internal meetings before arriving with the vote ready in parliament. “In practice, what happens is that the decisions that we need to make, in commissions, in leadership, in project design, inspection, all of them are discussed among the six co-councilors. Decisions are also collective, so we work together in the Chamber, ”explains Elaine Mineiro, who represented the Quilombo Periférico at the polls. For the mandate, the idea is for the population of the most extreme regions of São Paulo to be represented by them in parliamentary votes.

Even causing strangeness for some, the collective mandate model already works elsewhere in the country, including the state of São Paulo itself, with the Bancada Ativista, a group of nine people elected to the Legislative Assembly with more than 140 thousand votes. “They are not going to claim five votes, they are not going to claim nine votes, they are going to claim one vote, which is that person who is heading that group or the person who was actually elected”, recalls André Luiz Marques, executive coordinator of the Management Center and Insper’s Public Policies. For the specialist, there are no reasons for legal questions and the practice should be seen as an example of collective decisions that already occur in society. “At the end of the day, each councilor who is there in the Chamber, regardless of being in a collective representation or not, represents a collectivity. He had twenty, thirty, forty, fifty thousand votes there, so, anyway, he is representing these people ”, he analyzes.

In the specific case of São Paulo, the collective candidacies chosen by the population were from a left-wing party. During the electoral race, however, other collectives, such as PSDB’s “Todos Pela Acessibilidade”, all competed for the election. Toucans defended the rights of people with disabilities. For the specialist, the more the community is heard and structured within public policies, the better. “The worst thing you can have is a City Council or a Legislative Assembly that is all uniform. Any place you have, whether in a plenary session of the Legislature, or in a classroom, anywhere, is proven: the more diversity you have in these debates, the better the final result. So, this multiple participation is fundamental so that we can have a clearer representation of society ”, evaluates André Luiz Marques.

What do collective applications expect for the coming years?

Despite forming a minority within the Chamber, the two candidacies celebrate the advancement of names from the left in relation to the previous municipal election. PSOL, which previously had two seats in the house, now has six terms. Among them, that of a black woman and that of a trans woman. “The fact that the two collective candidacies that were elected are deeply rooted in social movements only shows that we need to be more there, in the spaces of power. So, more of our female bodies, trans women, black people, we all have to be there, but not in a way to contribute to those who have always been there, to contribute to the neoliberal government plan, which is the hegemonic dominant in São Paulo . It means being there with the political program that comes from the people ”, recalls the representative of the Feminist Bench. For Quilombo Periférico, the 2020 elections also demonstrate an advance in identity guidelines. “In the entire history of the city of São Paulo, we had only two black councilors and in an elective way, with a name in office, PSOL made three black women, plus other black women composing the benches [em 2020], so this is already a big gain, and we need to exalt and be happy about it ”, highlighted Elaine. Even with reasons to celebrate, the two groups say that there will be no easy walk being opposition in the coming years.

Elected with 46,200 votes, the Feminist Bench is formed by Silvia Ferraro, professor of history and activist of the Front of the People Without Fear; Paula Nunes, activist of the Afronte youth movement and the black movement since 2012; Carolina Iara, an intersex transvestite who has lived with the HIV virus for six years, a master’s student in Human and Social Sciences at UFABC; Dafne Sena, application worker, eco-socialist and vegan activist; and Natália Chaves, graduated in letters, translator, eco-socialist and also vegan. The group is waiting for a difficult first year due to the effects of the pandemic and being opposed to agendas that they do not consider positive for the city, such as the issue of privatization encouraged by the municipality and the state. “This is an accepted agenda and it is the common agenda for both the federal government, Bolsonaro, as well as the state and municipal governments, PSDB, in the figures of Doria and Bruno Covas. I don’t think it will be easy years, but it will be years of strengthening the popular voice, popular power and social movements within these spaces of power, which, for me, is the big news in the city of São Paulo from this new perspective ”, Says Sena.

The co-councilor believes that the political renewal proposed by the mandate is reinforced by the plurality of each of the participants. “None of us, alone, is able to express all these needs, so we bet on the collective candidacy. In this diversity, women with very different profiles, but who are in a single fight, it was precisely for that, for us to be able to meet this demand ”, he said. For those who are suspicious of the model adopted by the bench, she recalls the need to inspect the candidates elected on social networks. “It is not because something does not exist in the law that it does not exist in real life, in people’s lives. The decisions being made collectively happen all the time, from inside your home, in your family, in the residents’ association … It happens all the time. It is not because the law does not provide that they do not exist. ” According to Sena, one of the guidelines that the bench will also assume is the recognition of collective candidacy in practice.

The collective slogan Quilombo Periférico, formed by Erick Ovelha, Samara Sosthenes, Elaine Mineiro, Débora Dias, Júlio Cezar and Alex Barcellos, was elected with 22,700 votes. All six members of the group have a history of involvement with social movements and see the opposition post acquired within the Chamber as the possibility of discussing another country and city project with grassroots work. In a state whose public security data shows the black population as the most vulnerable, the group also wants to use the space gained in this election to talk about the existence of racism and the vulnerability of peripheral peoples with those outside the militant bubble that elected them. .

“As much as a good part of the population has contact with this discourse that there is no racism, in practice people know that it exists, so working and being able to show the population that racism does not derive from chance, but from a political project that has been built and that can be deconstructed, is our task as a militant, a black movement, a periphery movement. Our positioning is based on this dialogue, especially with this population that ends up taking this course ”, says Elaine Mineiro. The co-councilor cites recent achievements on the agendas of the anti-racist movement, such as suspension by the Senate of the Palmares Cultural Foundation which removed 27 names from the List of Black Personalities as an example of the importance of representativeness in political spheres. “The development and contribution of the black population, the LGBTQI population, women, the periphery and the working class in this city is represented in these names. Keep that hope and have the responsibility to translate it into work within the City Council, ”he said. For the mandate, the group hopes to take to the municipal plan the guidelines that it has been drawing up on the peripheral bases. “We just remembered the thousand days with no response to the murder of Marielle and Anderson. So, we hope to carry forward as many guidelines that we developed as a movement, such as Marielle’s agenda. These are important things that people will dedicate themselves to during these four years. ”