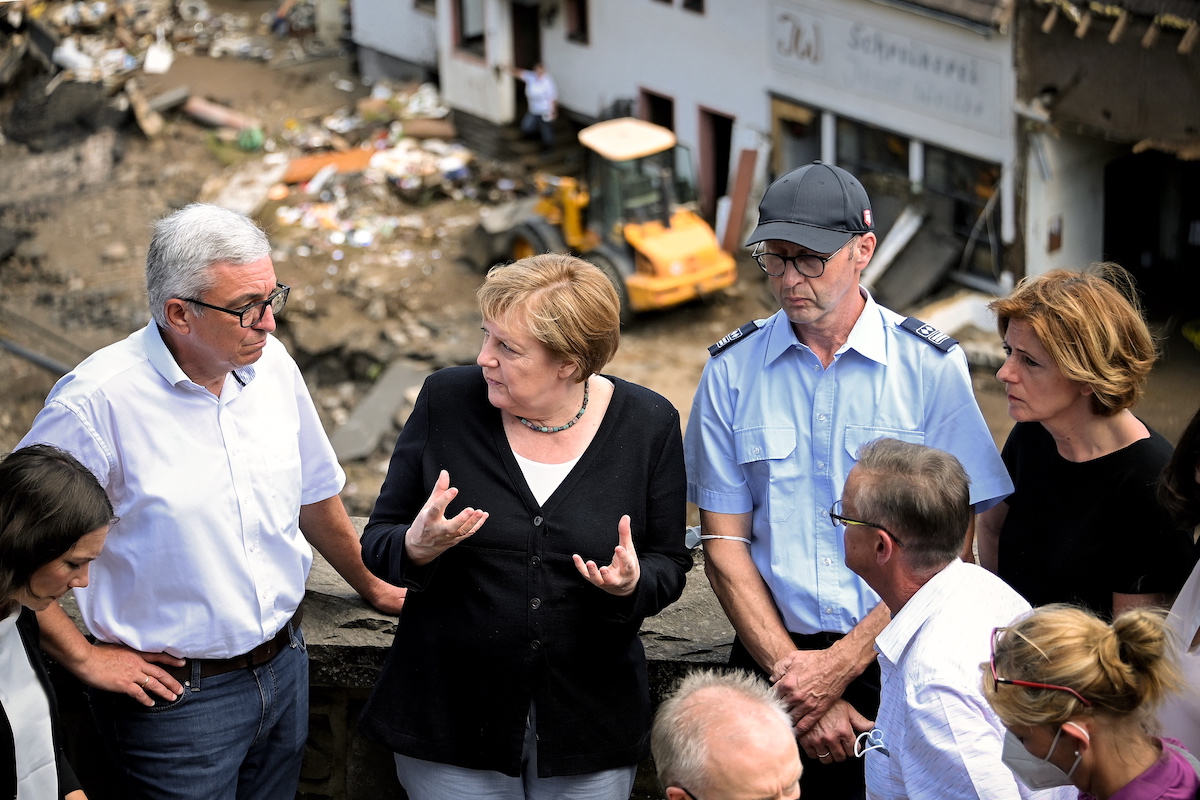 The German chancellor promised, this Sunday, “urgent help” to victims of floods in the west of the country, which have already caused nearly 200 deaths and whose effects described as “surreal”.

Second Angela Merkel, the floods that in recent days have caused a trail of death and destruction reveal the need to face “with ambition” the fight against the climate crisis.

“From here we have a real picture of what happened to a panorama surreal and spooky,” said the leader of the German government, during a visit to several affected areas in the Rhineland-Palatinate region. “I would almost say that the German language has difficulty finding words to describe the devastation caused,” he added.

During the visit to areas heavily affected by heavy rain, the chancellor promised that “the federal government and the regions will act together to gradually restore order” in these zones.

After noting the extent of the damage, Merkel called for an acceleration of the fight against climate change, noting that the damage caused by extreme weather events is “greater than in the past”.

“We have to hurry, we have to be faster in the fight against climate change”, the chancellor stressed in statements to the media and residents, after visiting the village of Schuld, which has been described as a “martyr” place. since almost everything in the locality was destroyed by the force of the waters.

Nearly 200 fatalities in Germany and Belgium

This Sunday afternoon, the latest official balances indicated that at least they have died 190 people following the floods and floods that affected Germany and Belgium.

On the day he received Merkel’s visit, the Rhineland-Palatinate region, in the southwest of the country, confirmed the death of 112 people, a national total of 159 fatalities.

Belgian authorities also updated the number of fatalities recorded in the country, which are now 31. The Belgian crisis center also reported that “163 citizens are reported as missing”, an increase from the 103 missing recorded on Saturday.

“The danger is no longer imminent in the affected areas. Rescue operations have ended, but search operations are still ongoing in several areas,” he said, adding that “the important thing cleaning work and the estimation of material damage is now at the center of concerns”.

The Belgian authorities are encouraging people who have not yet been able to make contact with their relatives to inform the police as soon as possible.

Although the water level has been declining in recent days, there are still areas of alert in Belgian territory, such as Wallonia, a French-speaking region in the south of the country. In this region is the town of Pepinster, where about a thousand people had to leave their homes.

In Wallonia, the water level of the Mehaigne River and its tributaries in the provinces of Liège and Namur continue to worry the authorities, who remain in a state of alert. About 37 thousand homes remain without electricity in the provinces of Liège and Walloon Brabant. There are also reports of roads and houses that are still submerged in some parts of the country.

In addition to Belgium and Germany, heavy rains and consequent flooding caused serious material damage in the Netherlands, Luxembourg and Switzerland.