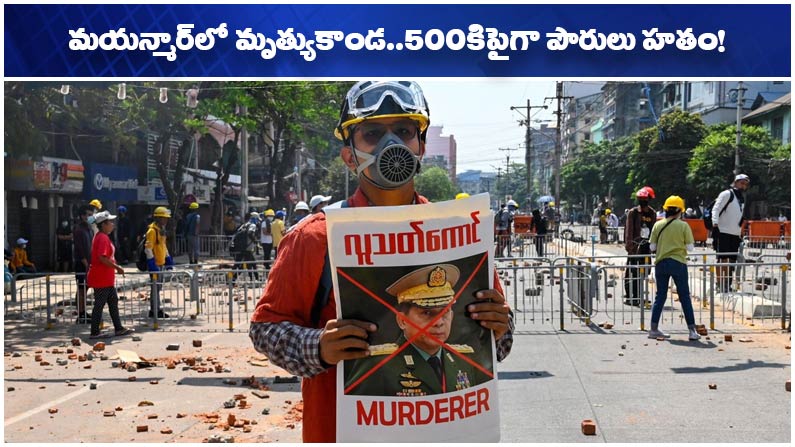 The carnage continues in Myanmar, which has been under military rule for two months. More than 500 civilians were killed in a military crackdown last week.

Myanmar Violence continue more than 500 killed: The carnage continues in Myanmar, which has been under military rule for two months. International media reported that more than 500 civilians were killed in a military crackdown that lasted for days last week. Unofficially the death toll is expected to be even higher. It is known that two months ago the army took control of the country. Since then there have been large-scale movements and agitations against the military coup in Myanmar over the past two months. The Burmese military has been working hard to quell the unrest, which has been unpredictable for days. Those who appeared were shot as they appeared. Thousands of Myanmar people have been forced to flee to neighboring countries, especially neighboring Thailand, in the wake of recent airstrikes on their own people.

The recent repression in Myanmar has been condemned by many countries, including the United States. Many countries have described the bloodshed created by the military as a horrific act. US Secretary of State Anthony Blinken responded via Twitter. At least 114 civilians have been killed in military violence in Myanmar on Saturday. These actions have already been condemned by several countries, including the United Nations. ‘The bloodshed created by the security forces on the protesters in Myanmar is horrendous. For some, the military is risking people’s lives. The Burmese people are opposed to the ongoing military action there, “said Blinken. Security forces opened fire on protesters against military rule in Myanmar on Saturday. 114 civilians were killed in the firefight. More than 400 civilians have been killed since the army seized power on February 1. On the other hand, General Minh Ang Liang, who led the uprising, said in a TV address on Saturday that elections would be held soon.

Army anarchy continues in Myanmar (Burma), which was in the news for a military coup on February 1. The military is suppressing the public will to fight for the preservation of democracy under their shoes. The Burmese army is almost freezing the lives of the people in the face of the bloody curfew. Many cities and towns, including Yangon (Rangoon), the largest city in the country, are being terrorized by military parades.

Military rulers often block the Internet in the country. The army has banned protests, rallies and protests. People are protesting on a large scale against military government orders such as the abolition of civil liberties. On the other hand, the military government is taking all possible measures to terrorize the people and protesters. It is known that the army overthrew the government on the pretext that there was no proper investigation into the irregularities in the elections held last year (November 2020). The army detained several ministers and politicians, including Aung San Suu Kyi, who was expected to win the election and take office on February 1. The military is taking a number of steps to crack down on protests in the country. Aung San Suu Kyi was due to appear in court on February 15. The army deliberately delayed it. The Army government has banned the gathering of more than four people in public places. Also curfew is being enforced across the country from eight o’clock at night to four o’clock in the morning.

Millions of people took to the streets in several parts of the country, including Nayapaita, despite warnings that violators could face up to six months in prison. Government officials are also expected to take part in the protests on a large scale. Railway staff are also reported to be ready to join the protesters. It seems that the Myanmar people are setting up United Defense Forces in their own territories to deal with the deliberate release of prisoners by the military. The international community warns that a civil war could erupt in Myanmar if this happens.

The superpower America has once again conned the Myanmar affairs. The United States has warned Myanmar military officials to refrain from violence against those fighting for the preservation of democracy. Ambassadors from 12 European countries, including the United States and Canada, have issued a stern warning to the Myanmar military government. The ambassadors of Myanmar also condemned the arrests of politicians. On the other hand, the Government of India is closely monitoring the affairs of neighboring Myanmar. It seems that External Affairs Minister Jayashankar has set up a special unit to keep abreast of Myanmar affairs and report to Prime Minister Modi.

The whole world hoped that if elections were held in Myanmar last November, democracy would win in that country even years later. Elections have taken place. Many countries have hailed the victory of democracy fighters like Aung San Suu Kyi, the leader of the National League for Democracy (NLD). But .. the recent military coup proved that the constitution of that country is mocking democracy there. According to the Myanmar Constitution, the military has privileges. Any decision in the country depends on the positive and negative policies of the Burmese Army.

Ambassadors of several countries have previously warned that since the elections in November 2020, the military and the movements of politicians who have been at its feet have remained suspicious. Exactly one week before the Army coup, several foreign embassies expressed suspicion that a coup was imminent. But the campaign was rejected by the Myanmar military. The Myanmar military was found to be unnecessarily suspicious. At a press conference a few days ago, some journalists questioned the suspicion of a coup, but the army spokesman did not rule out the possibility. As a result, many embassies informed their respective countries that the military coup was imminent.

According to the constitution of Myanmar, the government elected by the people continues to rule .. The military has the prerogative. That is why Ang San Suu Kyi initially reconciled with the army even after she was released from a long house arrest and came to power. Although the international community has condemned the attacks by Myanmar soldiers on Rohingya Muslims, Sookie has backed the military. Despite his international reputation, Sookie remained friendly with the military. Others have never criticized them.

The National League for Democracy (NLD), led by Aung San Suu Kyi, won 258 seats in the House of Representatives and 138 seats in the House of Nationalities in the November elections. The Union Solidarity Development Party (USDP), which had openly declared support for the military, was severely defeated. With the release of the election results, speculations began that a military coup was imminent in the country. Aung San Suu Kyi began considering a proposal to amend the constitution as she was likely to take the reins of government with a bumper majority. The Sookie team has also begun consultations in this direction. Military officials have been closely monitoring Sookie’s actions to amend the constitution and curtail military privileges. As the new parliament convenes on February 1, military officials have noted signs that the Sookie government is taking steps to amend the constitution. With that, exactly on the day of the start of the parliamentary session, the army went into revolt as if it were there.

Commander-in-Chief Min Ang Liang has been in tears for some time. For this he needs the support of a majority of members of parliament. According to Myanmar’s constitution, 25 percent of seats in parliament are held by the military. These were set up to make their support inevitable in the process of amending the constitution. With the number of USDP seats falling short in the previous elections, the chances of the military blocking a constitutional amendment from 25 per cent of its own seats are slim. With that, the chances of army chief Liang‌ becoming president of the country almost disappeared. Liang set the stage for an old-fashioned military coup as he had no chance of becoming president constitutionally. Internationally, almost all countries are engaged in the fight against the corona virus. The superpower America’s busy with their internal affairs has created a favorable environment for the Myanmar military.

There are also strong reasons to expect the Liangయా presidency. He will turn 65 in July 2021. He will have to step down as army chief. Ordinarily this is nothing to be taken lightly. But with retirement ల Layang is likely to start having difficulties. There is an international allegation that he led the massacre of the Rohingya. As soon as he retires, the way is open for an international trial against him. Not sure if Sookie would support then. Being in office provides protection from all of these trials. That is why observers speculate that Liang‌ may have ordered a military coup. It is noteworthy that the country’s military leader Liang seems to be strengthening this argument .. declaring that we have taken steps in that direction because a military coup is inevitable.

Liang landed in a military coup as he thought .. Aung San Suu Kyi was once again confined to house arrest. TV broadcasts and internet usage have been banned in the country. A curfew was imposed across the country. However, the people of the country are protesting in their own style against the actions of the army. Democrats in Myanmar have begun efforts to get the international community to focus on Myanmar. In this context, the Myanmar Army has resorted to violence to crack down on protesters. The international community is concerned that this is a worrying development.

Several countries, including India, have already condemned Myanmar’s military action. Biden, who took over the presidency of the United States last month, has warned that he will intervene in Myanmar’s case. Recently, 12 European countries, including the United States and Canada, issued warnings to the Myanmar military. If the violence against protesters continues, US-led forces are likely to enter Myanmar. The United States has already warned Osari not to tolerate the Holocaust. In this context, it is interesting to see what happens in Myanmar in the coming days.

ALSO READ: Another Telugu brilliance that shines in America .. Woman of Telugu descent nominated for a key position

ALSO READ: Many benefits with Dharani .. but insurmountable problems .. what is the solution?