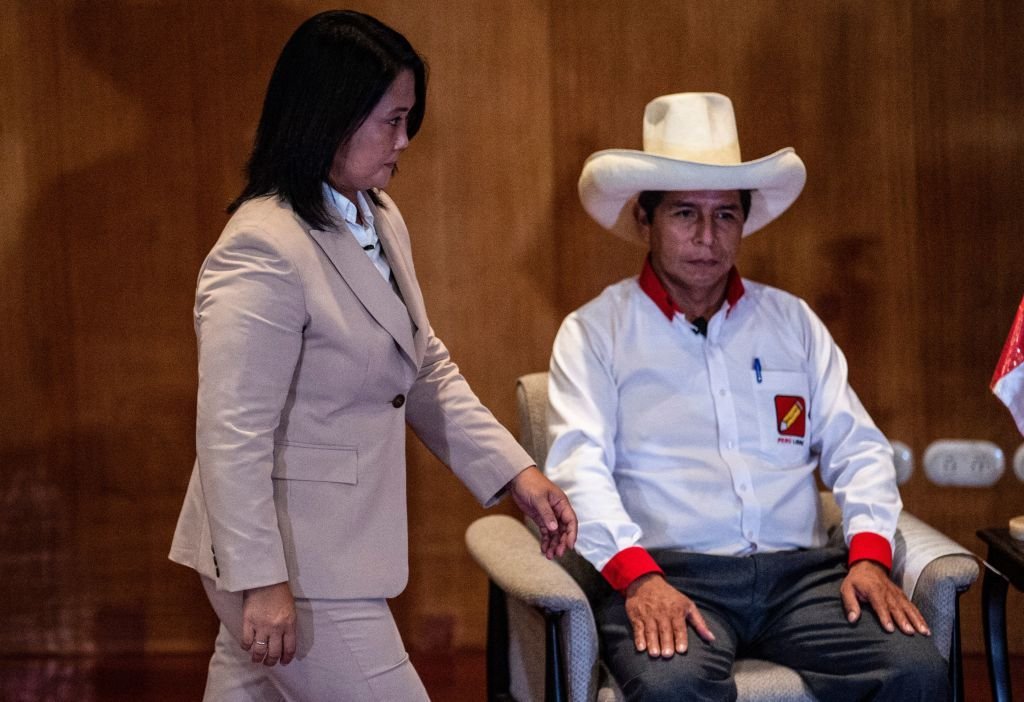 Peruvian rival presidential candidates Pedro Castillo (R), of the Peru Libre party, and Keiko Fujimori, of the Fuerza Popular party, are pictured during the signing of a ‘pledge to democracy’ ahead of the runoff vote, at the Peru Medical School in Lima on May 17, 2021. – The candidates took an oath coined the “Citizens Proclamation” that commits the winner of the June presidential election to defend democracy, fight COVID-19, defend the right to life, guarantee human rights and freedom of the press, as well as to leave the presidency after five years and not seek reelection. (Photo by Ernesto BENAVIDES / AFP) (Photo by ERNESTO BENAVIDES/AFP via Getty Images) (ERNESTO BENAVIDES/AFP/Getty Images)

The candidate for the presidency of the Peru in the last election Keiko Fujimori acknowledged this Monday, 19, the victory of Pedro Castillo in the second round of the election, held on June 6th. After more than a month of allegations of fraud, the candidate for Força Popular admitted in a statement that she was defeated, saying that she admits the results for being “what the law requires”.

“I announce that, fulfilling my commitments made to all Peruvians, to Mario Vargas Llosa, to the international community, I will recognize the results because that is what the law and the Constitution that I swore to defend mandates,” said Fujimori.

According to the candidate, “the truth will come out somehow”, and from now on “we are all going to work together to establish legitimacy in our country”. However, without lowering his tone, he suggested “hard times” and said the Peruvians would not let Castillo make the country “a Cuba, or Venezuela”, alluding to a Communist threat in power.

Today, the country’s National Elections Jury (JNE), the body responsible for part of the appeals, unanimously declared the inadmissibility of the five appeals presented by the Popular Force party, according to a statement. Thus, the JNE will proceed with the “immediate organization of the ceremony to hand over credentials to the corresponding presidential formula”, says the organ, in what should be scheduled for this week. The official inauguration of Peru’s new president is scheduled for July 28th.

On his Twitter, Castillo urged “people not to be surprised by lists and names of possible cabinets that have been circulating,” saying it is speculation. “After the proclamation of the JNE, we will make the respective official announcements to the government”, he projected.