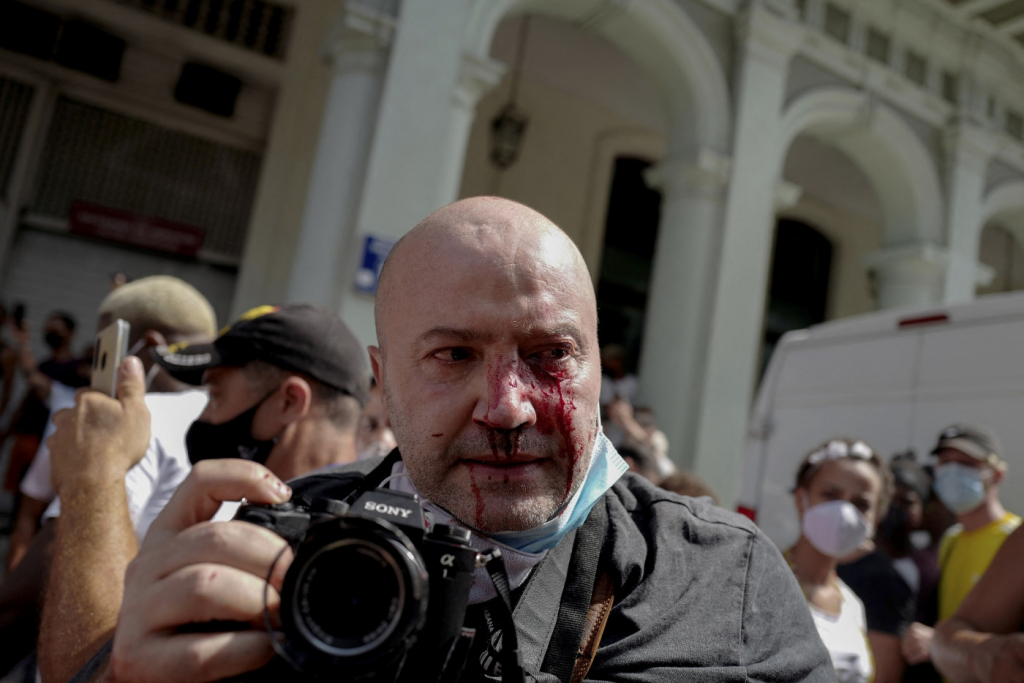 The agency for which he works said that Spaniard Ramón Espinosa was hit in the nose and in the eye during a police crackdown on a protest in Havana, but he is doing well.

Adalberto ROQUE / AFP/11.07.2021Spanish photographer had to be hospitalized after being beaten by police during protests in Havana

A press professional who covered the demonstrations against the government of Cuba in Havana, he was injured after being attacked by police officers in the midst of a crowd that took to the streets on Sunday, 11. The information was confirmed by Agência Press, the company for which the photographer was working at the time of the incident. “At least 300 pro-government people arrived at the scene with a huge Cuban flag shouting slogans in support of Fidel Castro and the Cuban Revolution. Some of these people attacked an AP videojournalist, damaging his camera, while an AP photojournalist was injured by the police,” says an excerpt from the report published by the agency on social media on Sunday. On Monday, the AP reported that the Spanish professional Ramón Espinosa was hit in the nose and in one of the eyes and had to undergo medical care. “Currently, he is hospitalized and without danger,” he said in a statement. Images of the moment Espinosa is attacked were recorded by a fellow photojournalist and posted on social media.

Despite evidence of aggression, President Miguel Díaz-Canel denied that any kind of repression of the protests had taken place. In a statement on TV, he even asked: “Where are the Cuban murders? Where is the Cuban repression? Where are the disappeared in Cuba?”. In response, Amnesty International called the Díaz-Canel demonstrations an “inflammatory rhetoric of war and confrontation” and said that the Cuban president’s speeches created “a violent environment against those who demand accountability and the free exercise of their rights” . The agency’s director for the Americas, Erika Guevara Rosas, affirmed that it is the authorities’ obligation to protect the rights of the Cuban population and said that the videos of attacks sent by social networks were “received with concern”.

Protesters who took to the streets of Havana and other cities on Sunday called for “freedom” and “down with the dictatorship”, as well as protesting against the economic and health crisis, demanding greater distribution of vaccines in the country. Clashes with security forces in the Parque da Fraternidade, where more than a thousand people gathered in front of the strong presence of military and police, were registered and, according to journalists present at the scene, many people were arrested. The presence of organized groups of government supporters, who chanted “I am Fidel” or “Canel, my friend, the people are with you”, in an allusion to President Miguel Díaz-Canel, was also registered in the region. The protest was considered historic, as this is the first time a large group of Cubans has taken to the streets to protest against the government since the 1994 economic crisis.