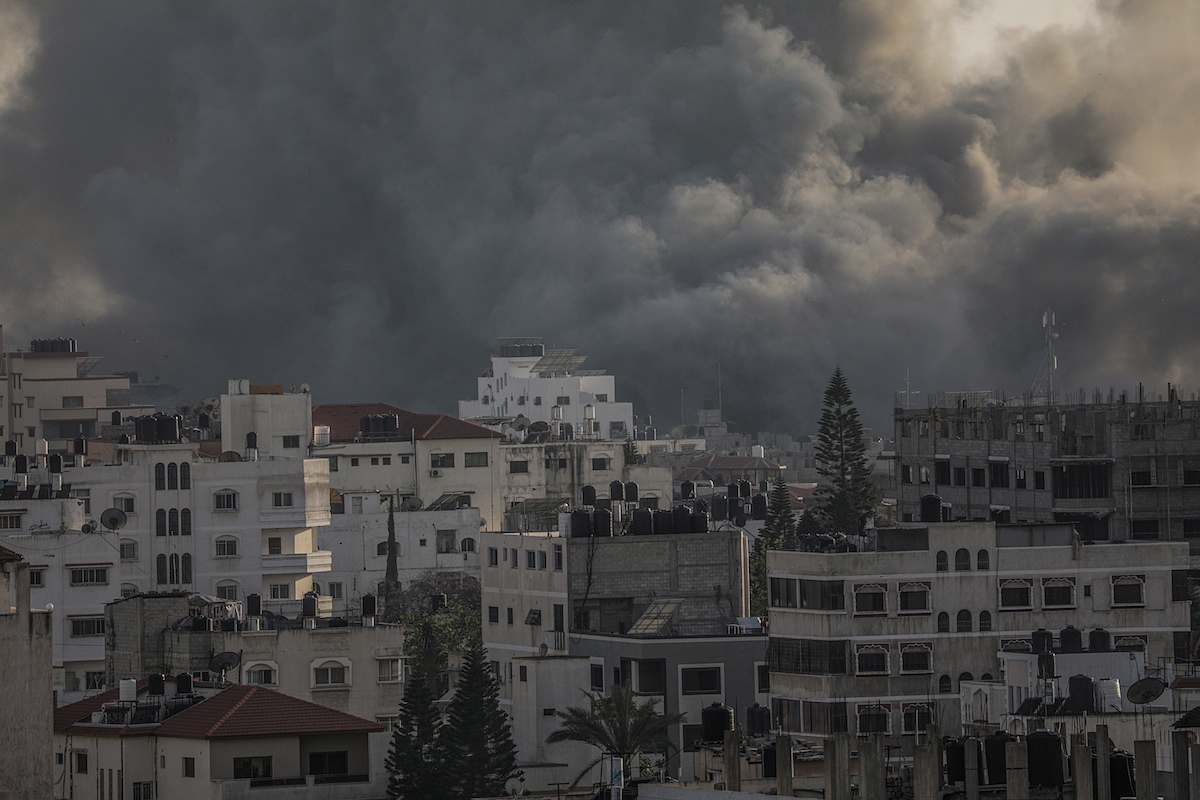 The international community calls for a ceasefire, but attacks on both sides continue without a hint of truce.

According to Al Jazeera, there were dozens of Israeli bombings against Gaza this Tuesday, even after the President of the United States called for a ceasefire in a telephone conversation with Israeli Prime Minister Benjamin Netanyahu.

In addition, a new conflict front was opened, after this Monday night, three rockets were fired from south lebanon to Israel, provoking Israeli retaliation.

“Three Grad-type ratchets have been launched from the Shebaa farm sector,” a Lebanese military source told France-Presse. The Israeli projectiles were then fired at Lebanon, he added.

According to the online newspaper Observador, which cites the newspaper Times of Israel, it was found a six-hour break during the last night without any rockets being launched by Hamas, in a sign that a ceasefire may be imminent. However, this morning, Palestinian militants returned to the attack.

At the moment, in the Palestinian enclave, the death of about 200 people, including 59 minors and 39 women, as well as more than 1300 injured. On the Israeli side, 10 deaths were counted, including that of two minors.

According to the Público newspaper, several calls are being heard for an immediate ceasefire. French President Emmanuel Macron said he was going to talk to the Egyptian President and the King of Jordan to come up with a concrete proposal.

One new emergency meeting, behind closed doors, the UN Security Council on the Israeli-Palestinian conflict was scheduled for this Tuesday.

“Innocent civilians continue to be killed and injured. We repeat: ceasefire. End hostilities now ”, wrote the Norwegian mission on his Twitter account.

Together with Tunisia and China, Norway has been at the root of the council’s mobilization over the past week, having so far been unable to adopt a joint declaration due to a refusal by the United States.

According to the Egyptian news agency MENA, the Egyptian Government has put in place a plan ordered by President Abdelfatah al Sisi to transfer and treat in hospitals, in the northern provinces of Sinai, Ismailiya (northeast) and in the capital, the wounded Palestinians.

As the weekly Expresso recalls, Gaza hospitals were already under pressure before the escalation of violence, due to the covid-19 pandemic. Now, they have to fight on both fronts, at a time when medicine and fuel are missing for the generators that supply these health units.

Palestinian parties, unions and civilian entities called for a general strike in Israel and in the occupied territories of East Jerusalem and the West Bank this Tuesday to protest “the Israeli attack on Gaza” and the evictions of Palestinian families.

“Companies, schools, universities and offices in the occupied territories” are called to close doors following the appeal of the nationalist Fatah party – led by the President of the Palestinian National Authority, Mahmoud Abbas, – for a strike, “said the official Palestinian news agency Wafa.

Union organizations of lawyers, teachers, the Higher Committee on Public Transport, the movement for the representation of prisoners and other organizations issued statements in support of the protest.

In turn, the High Committee for Arab Follow-up of Israel, which represents Israeli Arabs of Palestinian origin (about 20% of the Israeli population) also joined the strike.

Remember that this community has been target of lynchings and attacks by Jewish extremists over the past week, in different parts of the country.

“Journalists should not be stopped from doing their job”

The UN Secretary-General, António Guterres, is looking with great concern at the attacks that targeted the media in Gaza in recent days, namely the destruction of the agency’s facilities Associated Press.

“The secretary-general was very upset to see the building being destroyed. It is clear that journalists operating in Gaza must be able to do so without fear of harassment and the destruction of their offices, ”said spokesman Stephane Dujarric, at a press conference.

The spokesman said he did not have additional information about the incident, but stressed that “Very important to clarify” the facts and “what exactly happened”.

Asked about information published by Reporters Without Borders that indicates that a total of 23 international and local media offices have already been destroyed, Stephane Dujarric said that this situation should also be investigated. “Nothing should be done to prevent journalists from doing their job,” he added.

So far, the clashes have already forced the forced displacement of about 38,000 Palestinians and have already provoked more than 2500 homeless.

Heads of EU diplomacy under debate

The European Union (EU) Foreign Ministers will meet this Tuesday, by video conference, to discuss the escalation of violence in the Gaza Strip. This emergency meeting, called by the head of European diplomacy, starts at 2 pm in Brussels (1 pm in Lisbon).

The debate is due to the “ongoing escalation between Israel and Palestine and the unacceptable number of civilian casualties”, announced the High Representative for Foreign Policy, Josep Borrell, over the weekend.

According to Borrell, in this remote meeting, the European supervisory ministers will “coordinate and discuss the way in which EU can contribute to put an end to the current violence ”.

The 27 countries often struggle to find a common position on the Israeli-Palestinian conflict, with countries such as Germany, Austria or Slovenia firmly supporting Israel’s right to defend itself, while others urge the Hebrew state to show restraint. .

Controlled by the radical Islamic movement Hamas since 2007, the Gaza Strip is a Palestinian enclave under Israeli blockade for over a decade and where about two million people live.

The current fighting, considered the most serious since 2014, began on May 10 after weeks of tensions between Israelis and Palestinians in East Jerusalem, which culminated in clashes at the Esplanade of the Mosques, Islam’s third holy place next to the most sacred place of Judaism. .

Palestinians clashed with the police in response to Israeli police operations during Ramadan and the threat of eviction from dozens of families Palestinians by Jewish settlers.

The Israeli-Palestinian conflict dates back to the founding of the State of Israel, whose independence was proclaimed on May 14, 1948.