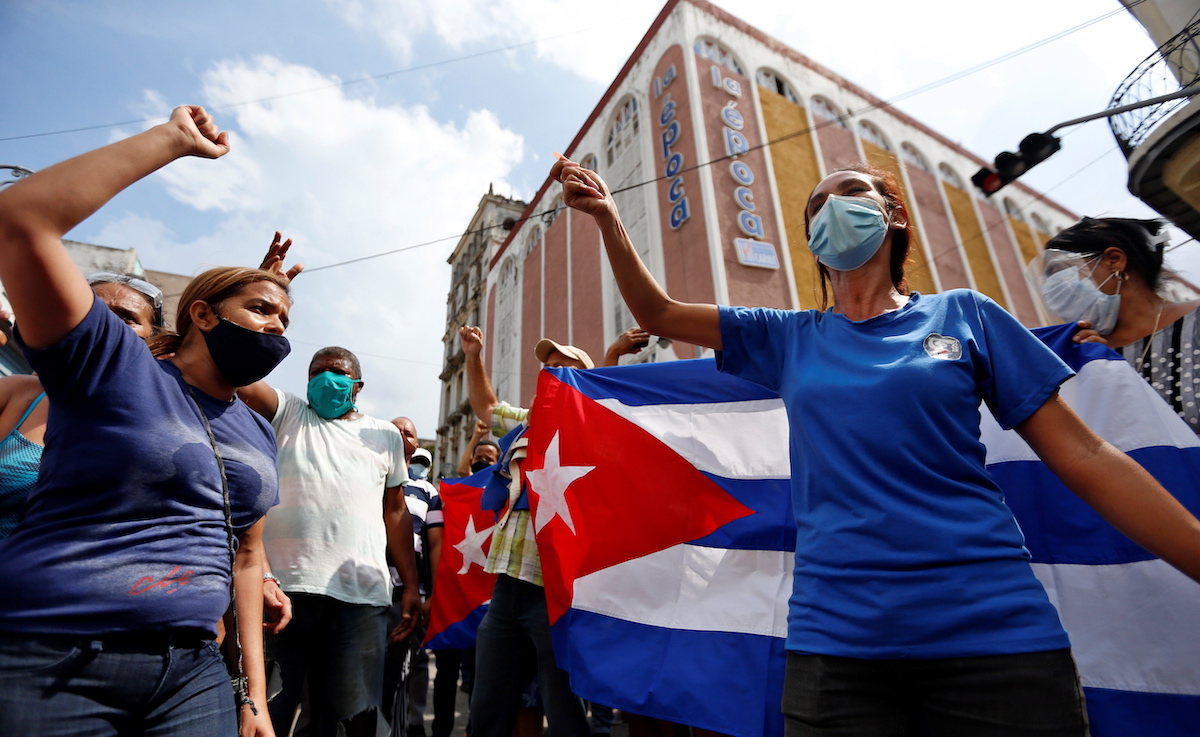 Thousands of Cubans have taken to the streets to protest against the regime. This Monday, a protester died during a clash with authorities. There are several injured and many people have been detained.

One 36 year old man died, this Monday, during a clash between protesters and security forces in Havana, in which several people were injured and others arrested, reported the Cuban news agency (ACN).

According to the ACN, the protest on Monday, in one of the poorest neighborhoods in the capital, was shown in several videos on social networks, despite the Government maintaining access to mobile Internet cut from sunday.

In the images, dozens of people are seen advancing through the streets shouting slogans such as “freedom” or “the united people will never be defeated”.

According to the version of the ACN, quoted by the agency EFE, the protesters “caused disorder and tried to go to the headquarters of the National Revolutionary Police (PNR), with the aim of attack the security forces and damage the facilities”.

They also guarantee, according to the EFE, that the mortal victim it had “precedents of contempt, theft and disorderly conduct” and that the authorities are investigating the circumstances of the death.

The demonstration came a day after thousands of people took to the streets to protest against the government of Miguel Díaz-Canel, whom they blame for the lack of food and medicine, power cuts and the worst outbreak of covid-19 since the beginning of pandemic.

According to the international organization Human Rights Watch, more than 150 people have been detained or are missing. The San Isidro Movement, which defends Cuban artistic expression, has published a list of activists who are believed to have been detained by the authorities.

On Sunday, journalists from CNN witnessed several people to be forcibly detained and thrown into the back of vans in Havana. So far, the Cuban government has not said how many people were arrested or injured in the protests.

This Tuesday, the United States appealed to Cuba to restore mobile Internet access, also reaffirming the requests for the release of the detained protesters.

“We ask Cuban leaders to show moderation and respect the voice of the people, opening up all means of communication online and offline,” US State Department spokesman Ned Price told reporters.

At a press conference in Miami, Orlando Gutiérrez-Boronat, co-founder of the Cuban Democratic Directorate, addressed US President Joe Biden, urging him to “intervene and protect the Cuban people from a bloodbath”, quotes Public newspaper.

“The vast majority of Cuban Americans, this large bloc of voters, would thank you for help bring down the regime“he said further.

The European Union has also called on the Cuban authorities to “immediately” release all people, protesters and journalists detained in the protests, a practice that it called “unacceptable”.

“We are aware of reports not only of the detention of opponents and activists, but also of journalists. This is absolutely unacceptable.“, said the spokesman of the European Commission for Foreign Affairs, Peter Stano.

The Portuguese Foreign Minister, Augusto Santos Silva, also urged respect for the right to demonstrate in Cuba and once again called for an end to US sanctions against the country, in an attempt to lessen the economic crisis.

“Portugal’s position is very simple: we hope that the situation in Cuba will evolve in a positive way and that people’s rights will be respected, which, from our point of view, includes the right to protest and peaceful meetings”, said the head of Portuguese diplomacy, in statements to Lusa news agency.

The head of Portuguese diplomacy expressed the desire that “problems of the economic, social and political nature have political answers and solutions”, because “this is the best way to solve the problems”.

The minister also addressed the economic sanctions imposed by the US on the Caribbean island and reaffirmed longstanding criticisms. “Portugal also understands, like many other countries in the world, that the lifting of sanctions on the part of the United States would greatly help to overcome some of the economic difficulties that Cuba is facing”.

The demonstrations that began on Sunday are the biggest in that Caribbean country, since the “Meleconazo”, which took place in August 1994 in Havana.