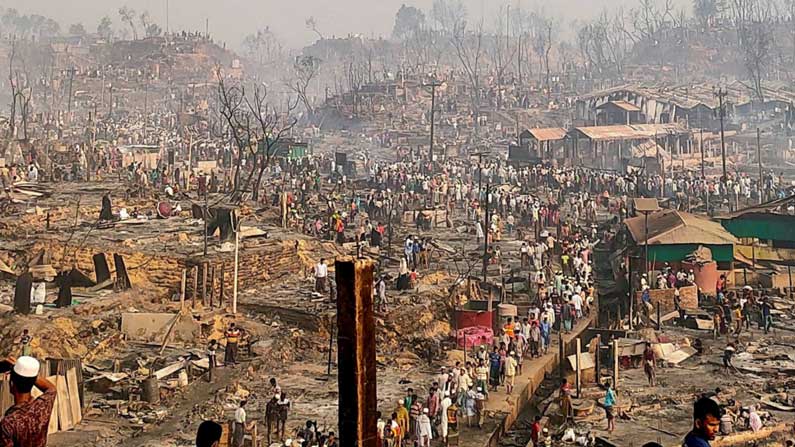 Rohingya Camp Blaze In Bangladesh: A fire at a Rohingya refugee camp in Bangladesh has killed at least 15 people. According to the latest information in this incident ..

Rohingya Camp Blaze In Bangladesh: A fire at a Rohingya refugee camp in Bangladesh has killed at least 15 people. According to the latest figures from the United Nations, 400 people are still missing and more than 45,000 have been displaced by the blaze. If so, fate has befallen those who hide in a country other than their own. The Rohingya refugee camp in the Cox’s Bazar district of Bangladesh is the largest refugee camp in the world. Tens of millions of people who fled Myanmar with their hands in their pockets are hiding here. The United Nations is building tents for Rohingya refugees and working to solve their problems. Hundreds of tents were set on fire within hours of the fire at the camp.

Fearing the onslaught, the refugees left their children and children behind to save their lives. This is a situation where many people do not know where they are. This is the biggest accident since 2017. The Bangladesh government has ordered an inquiry into the fire. Most of the objects were completely burnt in the fire. 10 thousand tents were completely burnt down. The United Nations has set up 34 refugee camps on 8,000 acres in the Cox’s Bazar district. One of the camps caught fire accidentally, leaving the entire camp on fire.

Firefighters worked tirelessly for 15 hours to put out the blaze and rescue the victims. Police believe the accident was caused by a gas cylinder exploding. The United Nations has released tens of millions of dollars in aid to help those in danger. Officials say two billion dollars is needed to meet the minimum requirements for all. The Bangladeshi government is moving Rohingya refugees to an island in the Bay of Bengal. So far 13,000 people have been evacuated. Many people do not come forward to go to the island as it is known that there is a threat of hurricanes.

At least 15 people have died and over 400 are missing after a fire in a Rohingya refugee camp in Bangladesh.

About 45,000 people are now displaced, says the UNHCR. Critics are calling for the removal of barbed wire fencing around the camp, which trapped people in. pic.twitter.com/EwMRs08nXD