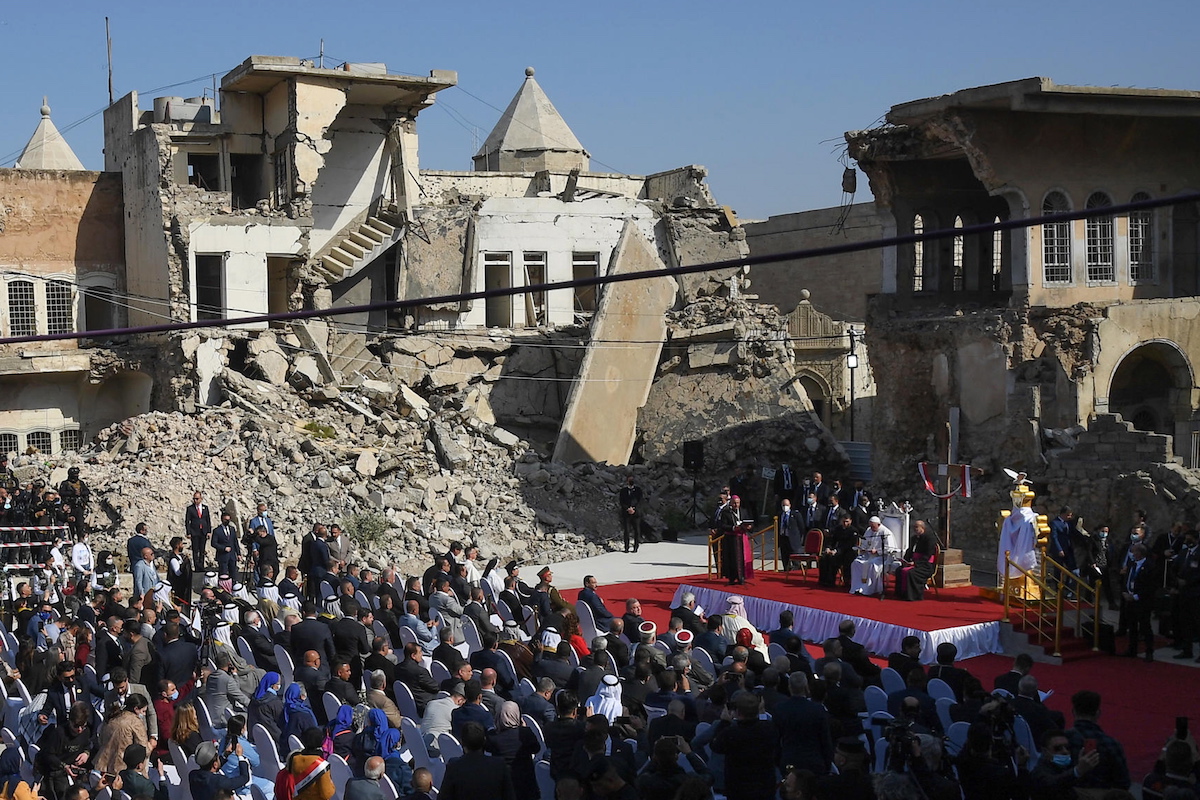 Pope Francis in the ruins of four destroyed churches in Mosul, Iraq

This Monday, Pope Francis’ three-day visit to Iraq ended. At the end of the last Mass he celebrated, he said in Arabic: “Salam, salam, salam” (Peace, peace, peace).

Pope Francis left Iraq this Monday after the first visit of a Vatican head of state to the country.

Since Friday, the Pope has traveled through Iraq having traveled to Baghdad, Mosul, Qaragosh, Ur and Erbil. The Vatican head of state defended one of the oldest Christian communities in the world before Ayatollah Ali Sistani, a religious reference of Iraq’s Shiite Muslims.

“Iraq will stay with me forever, in my heart, ”Pope Francis, 84, said this Sunday, before thousands of faithful who gathered in a stadium in Erbil, Iraqi Kurdistan, for a religious ceremony.

This was Pope Francis’ first trip abroad in the last 15 months. Due to the covid-19 pandemic, and with the exception of the Mass in Erbil, the Pope only met a few hundred people during the trip.

The Pope traveled 1,445 kilometers in Iraqi territory, most of the time by plane or helicopter flying over areas where clandestine cells of groups of Islamic extremists are found.

When he went to the country, the head of the Catholic Church said that “terrorism abuses religion”, called for peace and unity in the Middle East and regretted the departure of Christians from the area who were forced to seek refuge in other countries.

The mission of approaching minorities

On Friday, Francisco landed at Baghdad airport to start his journey through six Iraqi cities, with a mission to get closer to minorities and to build bridges to Shiite Islam through one of its main leaders, Ayatollah Ali Sistani, with who met in person on Saturday.

At the meeting, which lasted less than an hour, the Pope thanked Al-Sistani for “raising his voice in defense of the weakest and most persecuted”. The Ayatollah’s office, quoted by Expresso, said that they spoke of the “injustices and oppression” that many people in the region suffer, including the Palestinian.

Al-Sistani is said to have assured Francis that he “has an interest in Christians living like Iraqis, in peace and security and with all your rights“.

The Vatican head of state then traveled to the Ur region, where there is a Christian minority (the Chaldeans). There Abraão was born, the father of the three main monotheistic religions in the world.

In the Iraqi capital, he had a meeting with the Christian community, in the Syrian-Catholic cathedral of Our Lady of Salvation, the scene of the massacre of 47 people at the hands of Al-Qaeda in 2010, and called “martyr church”.

According to the weekly, on the last day, Pope Francis’ agenda included a visit to Erbil, the largest city in the autonomous region of Iraqi Kurdistan; Mosul, where he prayed for the victims of the war; and Qaraqosh, the main Christian city in Iraq, occupied in 2014 by jihadists.

The Pope found a country confined by the pandemic and subjected to strict security measures, but even circumstances prevented him from embracing the Christian community.