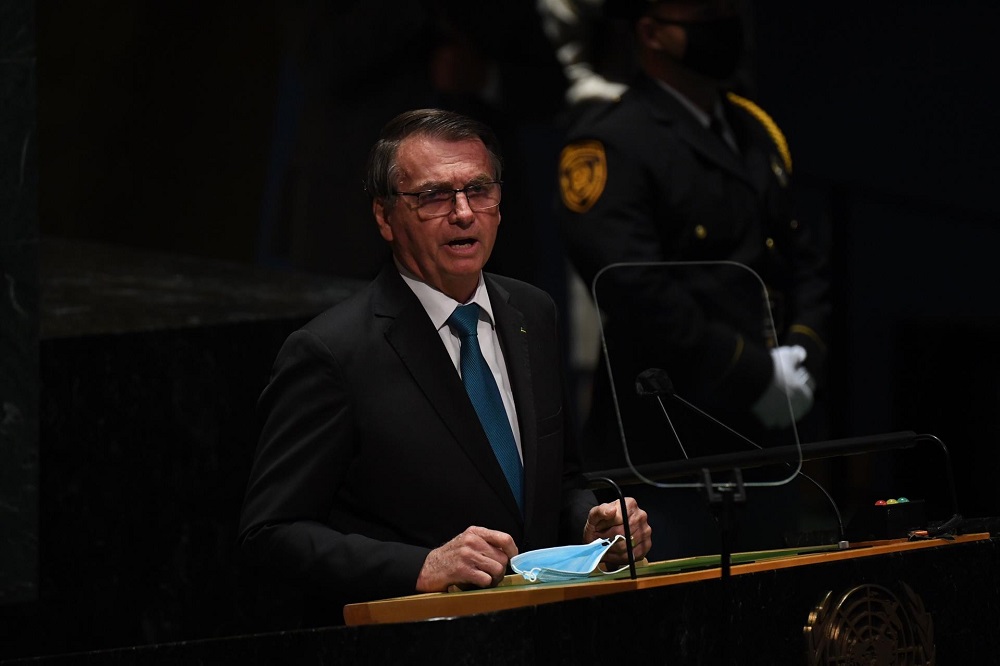 Jair Bolsonaro was in favor of vaccination, defended early treatment and criticized the health passport; Chief Executive also spoke about the Amazon and the Brazilian economy

The president Jair Bolsonaro (no party) made the opening speech at 76th General Assembly of the United Nations (UN) this Tuesday, 21. The Chief Executive was in favor of vaccination against the Covid-19, despite not having been immunized yet, and advocated early treatment. The Brazilian representative also criticized the vaccine passport and praised government measures in the pandemic, such as emergency aid. In his speech, Bolsonaro also stated that his administration had regained credibility abroad and spoke about the government’s environmental policy, which has already received several criticisms from other countries. The president reinforced commitment to achieving climate neutrality by 2050 and spoke about reducing deforestation.

Read and watch the full text of Bolsonaro’s speech at the UN General Assembly:

Mr. President of the General Assembly, Abdulla Shahid, Mr. Secretary General of the United Nations, António Guterres, Heads of State and Government and other heads of delegation. Ladies and gentlemen,

It is an honor to open the General Assembly of the United Nations again. I come here to show Brazil different from what is published in newspapers or seen on television. Brazil has changed, and a lot, after we took over the government in January 2019. We have been without any concrete case of corruption for 2 years and 8 months. Brazil has a president who believes in God, respects the Constitution and its military, values ​​the family and owes loyalty to its people. That’s a lot, it’s a solid foundation, considering that we were on the brink of socialism. Our state-owned companies had losses of billions of dollars, today they are profitable. Our Development Bank was used to finance works in communist countries, without guarantees. Those who honor these commitments are the Brazilian people themselves. All that has changed. I now present a new Brazil with its credibility already recovered.

Brazil has the largest investment partnership program with the private sector in its history. Program that is already a reality and is in full execution. So far, US$ 100 billion in new investments have been contracted and US$ 23 billion in grants have been collected. In the infrastructure area, we auctioned, for the private sector, 34 airports and 29 port terminals. There are already more than $6 billion in private contracts for new railroads. We introduced the railway authorization system, which brings our model closer to the American one. In just a few days, we received 14 applications for permits for new railroads with nearly $15 billion in private investments. In our government, we promoted the resurgence of the road modal. As a result, lower consumption of fossil fuels and a reduction in the Brazil cost, especially in the lower cost of food production.

Great progress has been made in the area of ​​basic sanitation. The largest auction in the sector’s history was held in April, with a concession to the private sector of water and sewage distribution services in Rio de Janeiro. We have everything investors are looking for: a large consumer market, excellent assets, a tradition of respect for contracts and trust in our government. I also announce that in the coming days, we will hold an auction for the implementation of 5G technology in Brazil. Our modern and sustainable low-carbon agriculture feeds more than 1 billion people in the world and uses only 8% of the national territory.

No country in the world has such complete environmental legislation. Our Forest Code must set an example for other countries. Brazil is a country with continental dimensions, with great environmental challenges. There are 8.5 million square kilometers, of which 66% are native vegetation, the same since its discovery in 1500. Only in the Amazon biome, 84% of the forest is intact, sheltering the greatest biodiversity on the planet. Remember that the Amazon region is equivalent to the area of ​​the whole of Western Europe. We anticipate, from 2060 to 2050, the goal of achieving climate neutrality. Human and financial resources, destined to the strengthening of environmental agencies, were doubled, with a view to eliminating illegal deforestation. And the results of this important action have already started to appear! In the Amazon, we had a 32% reduction in deforestation in the month of August, when compared to August of the previous year. Which country in the world has an environmental preservation policy like ours? You are invited to visit our Amazon!

Brazil is already an example in energy generation with 83% coming from renewable sources. At COP-26, we will seek consensus on the rules of the global carbon credit market. We expect industrialized countries to effectively meet their climate finance commitments in relevant volumes. The future of green jobs is in Brazil: renewable energy, sustainable agriculture, low-emission industry, basic sanitation, waste treatment and tourism. We ratify the Inter-American Convention against Racism and Related Forms of Intolerance. We have the traditional family as the foundation of civilization. And human freedom is only complete with freedom of worship and expression. 14% of the national territory, that is, more than 110 million hectares, an area equivalent to Germany and France together, is destined to indigenous reserves. In these regions, 600,000 Indians live in freedom and increasingly want to use their land for agriculture and other activities.

Brazil has always participated in UN Peacekeeping Missions. From Suez to Congo, passing through Haiti and Lebanon. Our country has always welcomed refugees. On our border with neighboring Venezuela, the Federal Government’s Operation Welcome has already received 400,000 Venezuelans displaced due to the serious political and economic crisis generated by the Bolivarian dictatorship. The future of Afghanistan also causes us deep concern. We will grant humanitarian visas to Afghan Christians, women, children and judges. In these 20 years since the attacks against the United States of America, on September 11, 2001, I reiterate our repudiation of terrorism in all its forms. In 2022, we will again occupy a seat on the UN Security Council. I thank the 181 countries, out of a universe of 190, that trusted Brazil. Reflection of a serious and responsible foreign policy promoted by our Ministry of Foreign Affairs. We support a reform of the UN Security Council, where we seek a permanent seat.

The pandemic took everyone by surprise in 2020. We regret all the deaths that occurred in Brazil and in the world. I have always defended fighting the virus and unemployment simultaneously and with the same responsibility. Isolation and lockdown measures have left a legacy of inflation, particularly in foodstuffs around the world. In Brazil, to serve those most humble, forced to stay at home by decision of governors and mayors and who lost their income, we provided emergency aid of US$ 800 to 68 million people in 2020. I remember that we ended 2020, the year of the pandemic , with more formal jobs than in December 2019, thanks to our government’s actions with job and income maintenance programs that cost us around US$40 billion. In the first 7 months of this year alone, we created approximately 1,800,000 new jobs. I also remember that our growth for 2021 is estimated at 5%.

So far, the Federal Government has distributed more than 260 million doses of vaccines and more than 140 million Brazilians have already received at least the first dose, which represents almost 90% of the adult population. 80% of the indigenous population has also been fully vaccinated. Until November, everyone who chose to be vaccinated in Brazil will be assisted. We support vaccination, however our government has been against the health passport or any obligation related to vaccination. Since the beginning of the pandemic, we have supported the physician’s autonomy in seeking early treatment, following the recommendation of our Federal Council of Medicine. I myself was one of those who underwent initial treatment. We respect the doctor-patient relationship when deciding on the medication to be used and its off-label use. We don’t understand why many countries, along with much of the media, were against the initial treatment. History and science will know how to hold everyone responsible.

On September 7th, the date of our Independence, millions of Brazilians, in a peaceful and patriotic way, took to the streets, in the greatest demonstration in our history, to show that they do not give up democracy, individual freedoms and support for our government. As shown, Brazil is living in new times. In the economy, we have one of the best performances among emerging countries. My government recovered its external credibility and, today, it presents itself as one of the best destinations for investments. It is here, in this General Assembly, that we glimpse a world of greater freedom, democracy, prosperity and peace. God bless you all.