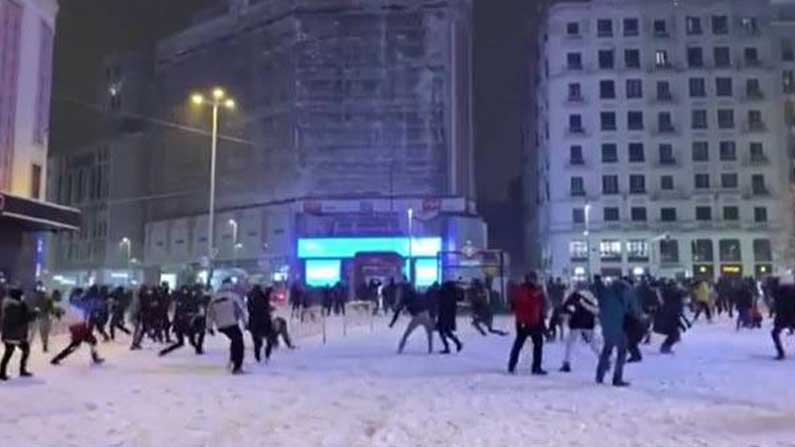 Until yesterday, people who lived in fear of the corona virus .. forgot the pain and fear of seeing the snow falling in their area. They were overjoyed to see their city whitewashed by the heavy snowfall.

Snowball Fight In Spain: Until yesterday, people who lived in fear of the corona virus .. saw the snow falling in their area and forgot the pain and fear. The locals were overjoyed to see their city whitewashed by the heavy snowfall. With this, hundreds of people reached and fought on the snow-covered roads at once. He grabbed the ice cubes in his hand and threw them into the crowd. Chattered, attacked with enthusiasm. Floated in ecstasy. The ice fight took place in Madrid, Spain. Snow shows its cosmic form in many places, including the Spanish capital Madrid. Hurricane Philomena strikes several places. This left most areas covered with the heaviest amount of snow in decades.

Seeing the atmosphere of sharing happiness the youth came up the roads in different parts of the city and split into two groups and threw snowballs at each other. Enjoyed. The government, on the other hand, deployed a rescue team to clear the snow. The storm forced thousands of people to stay in the country. Many stopped at airports. Due to the snow on the roads and railway tracks, cars and trains could not walk. Madrid is struggling with the heaviest hurricane since 1980. Suburban highways were closed, including the closure of City Main Park. Some serious restrictions were imposed. Authorities also issued a red alert. The army also entered the field for relief operations.

Also Read:
A huge explosion at a gold mine in China .. 22 workers trapped… Interruption of cooperation