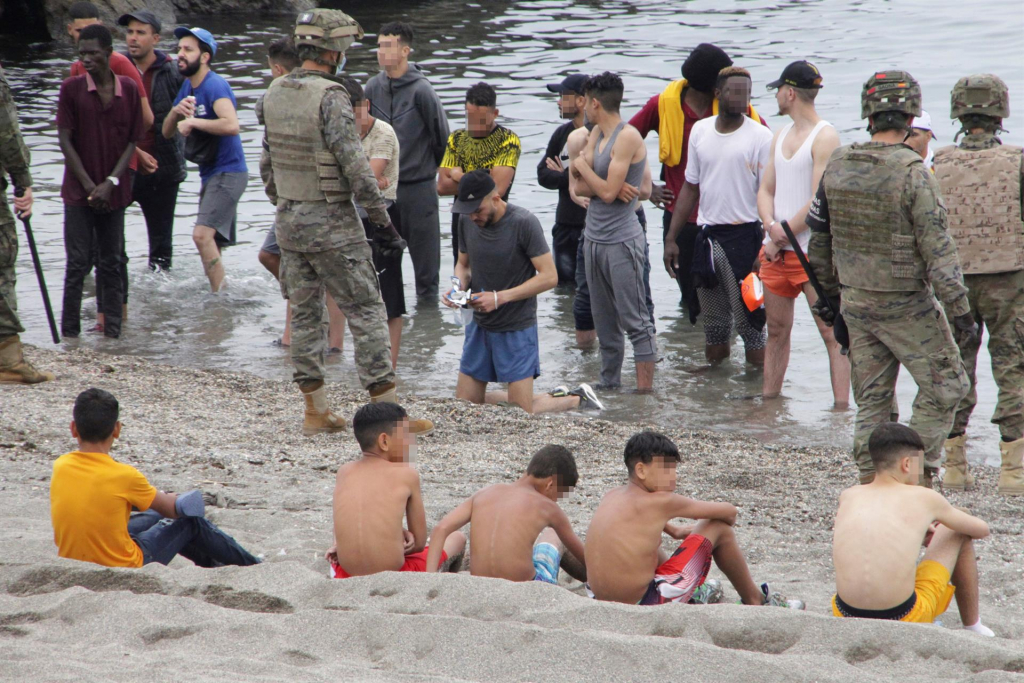 The crisis is being considered unprecedented in the region’s history; thousands of families continue to head to the border with the enclave to try to cross over on foot or swim

EFE/ReduanSoldiers form cordon while Moroccans stand in water; only minors are being protected

The authorities of the Spain affirmed that this Tuesday, 18, at least 6 thousand migrants coming from the Morocco entered the city of Ceuta, a Spanish enclave on the African side of the Strait of Gibraltar. The number was considered a daily record, and at least one person died during the crossing. These migrants, including 1,500 minors, arrived swimming or on foot without facing great resistance from Moroccan forces, who only later fired tear gas to disperse the crowd that formed in the town of Fnideq, across the border. . The Spanish Ministry of the Interior, in turn, sent 200 soldiers and 200 police officers to reinforce its border security, which is normally made up of 1,100 men. Minister Fernando Grande-Marlaska says that 2,700 migrants have already been sent back to Morocco while negotiations on returns are continuing. As determined by international laws and treaties, only minors are being protected. Photos from the site show young Moroccans waiting to stand, still in the water, while soldiers form a cordon on the beach. Prime Minister Pedro Sanchez even canceled a trip to the France to focus on “returning Ceuta to normal”. Since the early hours of Tuesday, the 18th, thousands of people from all over Morocco are moving in an unstoppable flow to the border with Ceuta, including the elderly and mothers with babies.

Although to a lesser extent, a similar phenomenon is taking place in Melilla, another Spanish autonomous city in North Africa. There, another 300 migrants attempted to cross the border irregularly on Tuesday, 18, at least 86 of which succeeded after crossing the fence that separates the Spanish enclave from Moroccan territory. The migratory crisis of the past few days is unprecedented in Spain: the most recent record had been on the weekend of 7 and 8 November, when 2,200 people entered the Canary Islands. The massive influx of migrants to Ceuta comes amid diplomatic tension between Spain and Morocco over Western Sahara, a former Spanish colony occupied by Moroccans. At the same time, there is also a crisis caused by the closing of the borders between Ceuta and Morocco due to the pandemic of the new coronavirus.